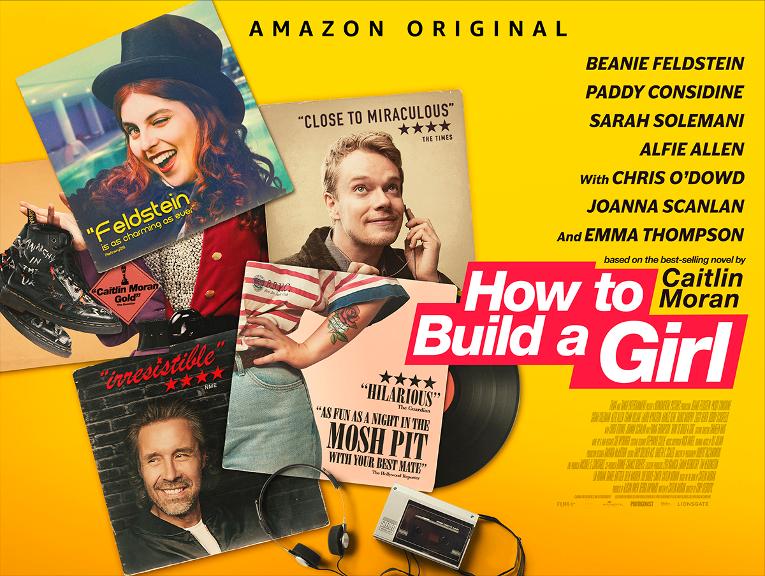 Based on the semi-autobiographical novel by Caitlin Moran, How To Build A Girl is the story of Johanna Morrigan (Beanie Feldstein), a 16 year old school girl who has a love for books and dreams of one day becoming a writer.

Set in 1993 Wolverhampton where Johanna lives with her unemployed father (Paddy Considine), a 70’s rocker who thinks he still has what it takes to make it in the music industry, her mother (Sarah Solemani) who, after the recent birth of twins, suffers from post-natal depression and her two brothers. Living in a partitioned bedroom with one of her brothers (Laurie Kynsaston), “like the Berlin Wall” as she describes it, Johanna takes inspiration from talking to, and getting a reply from, a wall full of pictures she calls “The God Wall” (The God Wall is made up of nice cameos from various stars including Michael Sheen, Lily Allen and Sharon Hogan).

With a talent for writing she enters a local TV stations poem writing competition, which she wins.

After having “a nervous breakdown” in front of the cameras” she becomes the laughing stock in her school. Undaunted by her experience she writes a piece on the Annie soundtrack for a reviewing completion run by the music weekly D&Me. Failing to win the competition but impressing the staff with her enthusiasm and determination she’s given a trial post that entails her going to Dublin and interviewing a famous singer called John Kite (Alfie Allen).

Even although Kite opens up to Johanna her finished article turns out to be a disaster, described by one of the D&Me’s journalists as “an article written by an excited teenage girl”, and Johanna is sacked.

Again undaunted by her rebuttal she rebrands herself as the top hat wearing, red haired “bitch” Dolly Wild.

Marching into the papers office with a new found confidence she manages to get her job back and becomes an overnight sensation for her scathing and hurtful reviews.

How to Build A Girl is a story of how you should never give up on your dreams, Caitlin Moran wrote for Melody Maker (an obvious inspiration for the fictional D&Me) when she was 16 and I would imagine that the sexual advances and condescending attitudes that, Dolly/Johanna had to deal with from the “posh writers” at the paper came from personal experience.

Feldstien is good in the main character role but never really truly convinces as a girl from Wolverhampton, there are a few occasions where her midlands accent appears to slip and her true American accent slips out.

How To Build A Girl will undoubtedly delight its target audience of teenage girls.