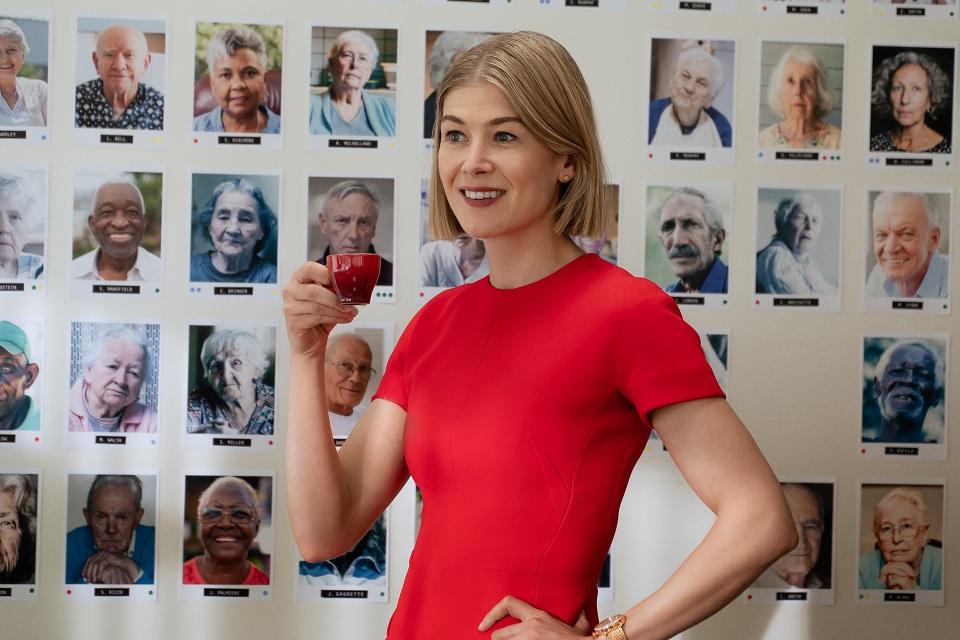 Rosamund Pike is mesmerising as the evil court appointed lawyer Marla Grayson in British writer – director J Blakeson’s darkly witty black comedy I Care A Lot. The story about court appointed carers deliberately setting out to fleece their elderly wards at first glance might not be something that would seem to be in good taste but the story, if taken in the tongue in cheek way that it’s portrayed, is a lot of fun.

The plot is pretty simple, Maria Grayson (Pike) and her lover Fran (Eliza Gonzalez) have set up a lucrative business where, with the help of a local doctor, they convince a court that an elderly person is incapable of looking after themselves and, after they are appointed as their legal guardians, rob the poor old folk of everything they’ve worked their whole life for.

After one of their wards die the pair, with a spare room in a care home to fill, come across a well-to-do elderly woman called Jennifer Peterson (Dianne West). Peterson appears right for the picking, a cherry as they delightfully call her. With no family or relatives and before you can say “how are you Miss Peterson” the evil pair have her whisked off to a care home where she’s locked down 24/7 and every aspect of her life, including her food and drugs, is overseen by Grayson.

However poor elderly Miss Peterson isn’t quite as naive as she seems, to tell anymore would probably spoil a lot of the enjoyment so just let me say that the story involves Peter Dinklage as a Russian mafia boss and you might guess where it goes.

Wonderful performances, Pike, West and Dinklage are all excellent, make I Care A Lot highly watchable. The story moves along at a cracking pace with more twists a turns than a switchback road. Just when you think you know what’s about to happen Blakeson turns the story on its head. The plot does tend to get a bit silly and lose its way in the final third but it’s still a lot of fun and well worth a watch.