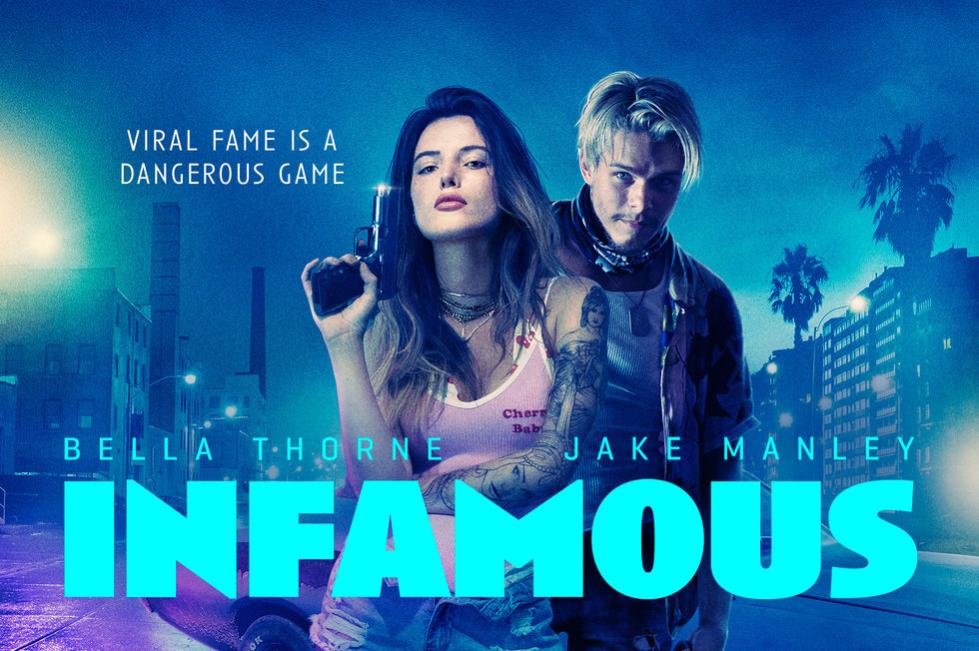 The story of young lovers roaming across the USA and committing crimes as they go isn’t a new one, Bonnie and Clyde (1967) being the most famous example so to try and bring something new to the genre is pretty difficult. Written and directed by Joshua Caldwell Infamous tries its best and is a modern working of that old story,

Arielle (Bella Thorne, Assassination nation, The Babysitter), “My mother named me after a mermaid “she reluctantly tells others, lives in a small Florida town and dreams of one day becoming popular and famous. Falling for a recently paroled criminal called Dean, (Jake Manley, The Order, Midway), the pair leave town after Arielle’s mother’s boyfriend steals her savings and Dean accidently kills his father during an argument.

Heading off across the state with no money the pair rob a convenience store. But rather than trying to remain anonymous Arielle records the heist on her phone and posts it on social media. Finding that her lowly number of followers rises significantly she becomes obsessed with filming the pair’s crimes, which involve shooting a cop dead, stealing money from marijuana dealers and ultimately robbing banks.

Bella Thorne is practically good, in fairness she has the advantage of having the most fleshed out role, Manley on the other hand is lumbered with a character that doesn’t seem able to think for himself, knowing that their media presence is going to lead only one way, he lets Arielle carry on with her ego trip.

Infamous’s 15 minute of fame theme is certainly a powerful one and will no doubt resonate with large proportion of the films target audience.