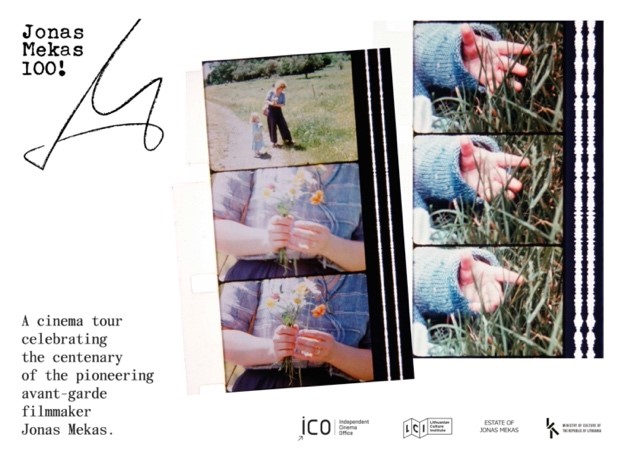 In celebration of the centenary of Jonas Mekas’ birth, the Independent Cinema Office, Lithuanian Cultural Institute and curator Herb Shellenberger present the Jonas Mekas 100! UK Cinema Tour, showcasing some of Mekas’ most-celebrated films alongside lesser-seen works and tracing his influence in works that he inspired.

The Jonas Mekas 100! UK Cinema Tour will run in venues across the UK until December 2022. Details of participating venues can be found here .

From humble beginnings in a tiny farming village in Lithuania, Jonas Mekas would emerge as a pivotal figure whose influence on twentieth-century art, cinema and culture extended internationally. As the central node of avant-garde film in the United States, he had an irrevocable impact on people like Andy Warhol, The Velvet Underground, John Lennon and Yoko Ono, Shirley Clarke, John Waters and Martin Scorsese. Over his 96 years, Mekas’ long list of accomplishments—included founding Film Culture magazine, the Film-Makers’ Cooperative and Anthology Film Archives—complementing his achievements as a poet, diarist, artist, organizer and, perhaps most importantly, a filmmaker.

Jonas Mekas 100! features a rare chance to see three landmark works by Mekas in the cinema: Reminiscences of a Journey to Lithuania (1976), depicting Jonas and his brother Adolfas’ return journey to their homeland, a film that was inducted into the United States National Film Registry in 2006; a new digital restoration of As I Was Moving Ahead Occasionally I Saw Brief Glimpses of Beauty , an epic, 4.5 hour-film that premiered to acclaim at the 2000 London Film Festival; and Out-Takes from the Life of a Happy Man.

The tour also features a brand-new programme of Mekas’ short films created over 51 years. This programme, made in collaboration with the Jonas Mekas Estate and RE:VOIR brings the joy, beauty and sense of wonder integral to his cinema to audiences across the United Kingdom. A fifth program contextualises Mekas’ work as a programmer, showing the work of his friends and co-conspirators whose films he exhibited at Anthology Film Archives in New York.

Reminiscences of a Journey to Lithuania (87 mins)

Reminiscences of a Journey to Lithuania is preceded by a video from Mekas’ 365 Days Project, in which he released one video on each day of 2007 on his website. The video from February 21 is a comment on Britney Spears, shown in the newspaper days after she shaved her head. Mekas says, “They say she’s about to go through a nervous breakdown… Nervous breakdowns are very necessary! The artists that don’t go through nervous breakdowns: I don’t trust them.”

This epic diary film is structured into twelve chapters, each introduced by Mekas’ wry and self-reflexive commentary. We are proud to present the film in a brand new digital restoration by RE:VOIR with support from the Lithuanian Film Center, preceded by Wien & Mozart, Jonas Mekas’ creative trailer commissioned for the 2001 Vienna International Film Festival.

Out-Takes from the Life of a Happy Man (88 mins)

Out-Takes from the Life of a Happy Man is preceded by Self-Portrait, Mekas’ first work made with a video camera in 1980. Shot at 1:45PM on a sunny afternoon in front of curator Sally Dixon’s house in St. Paul, Minnesota, the twenty-minute video is a masterclass in liveness, spontaneity and improvisation.

The New American Cinema and After (70 mins)

To complement the four programs of Jonas Mekas’ films in this series, this programme contextualises his own filmmaking through works by filmmakers who were his peers or who worked as a result of his influence and history.

This programme presents a curated selection of Jonas Mekas’ short-form works made across a fifty-one-year period, showcasing the remarkable breadth of cinematic forms that he worked in over the decades.