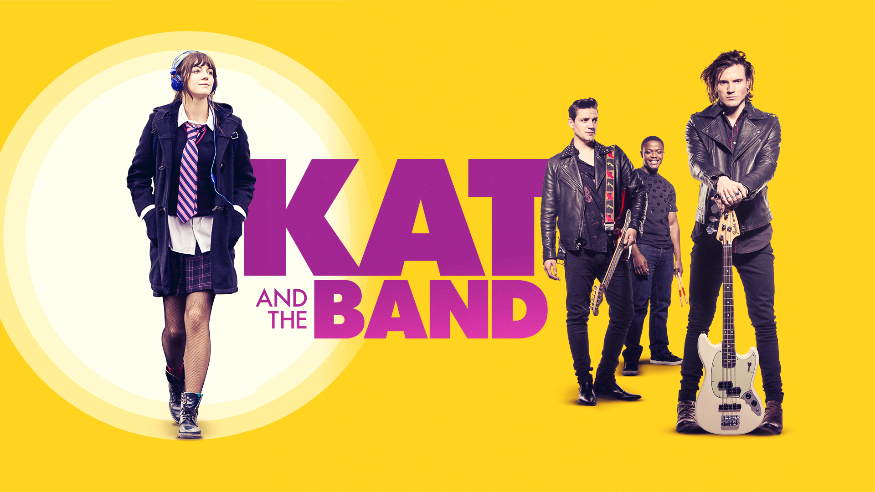 The big attraction for many in Kat and the Band will be seeing Dougie Poynter from McFly/McBusted making his big screen acting debut. The question ultimately is, is he any good? I’m pleased to say that he’s not bad at all, his role is limited and he pretty much plays himself, but anything that he’s given to do he does with a dash of charisma and a level of professionalism that might see him turning up in more meatier and challenging roles in the future.

Kat And The Band is an enjoyable, if somewhat implausible story of 17 year old high school pupil Kat Malone (Ella Hunt). Kat, when she’s not working for her exams, dreams of being the manager of a professional band.

She gets her chance one night when she sneaks into a rock club and manages to persuade struggling indie pop group, “Dollar Days” and its bassist (Dougie Pointer) to take a chance on her. The one thing that she doesn’t tell them is that she’s a 17 year old school girl who lives at home with her mother and gran (Katherine Kelly and Joanna David).

Suckered in by her intelligence and charm the band give her a trial period in order that she can prove her worth to them. Running her business from her local Greek restaurant, a place where Kat and her friend are permanent fixtures, she manages to arrange a number of gigs for the wannabe rockers, each one inevitably ending up in a bigger disaster than the one before.

Her lie is made all the easier by her mother’s lifestyle, a business woman, her mother is away for days on end and pretty much leaves Kat to her own devices.

Ella Hunt follows up her last big screen outing (or small screen outing as is the case of Kat and the Band thanks to Corona Virus) in Anna and the Apocalypse with another fine performance. It’s not her fault that she’s 22 years old and is being asked to play a 17 year old schoolgirl but her casting, no matter how hard she tries, never really works as she feels and looks way too old (sorry Ella) for the part she’s playing (in fairness the story is about a teenger convincing a group of grown men that she's old enough to be their manager, so we'll forgive that one).