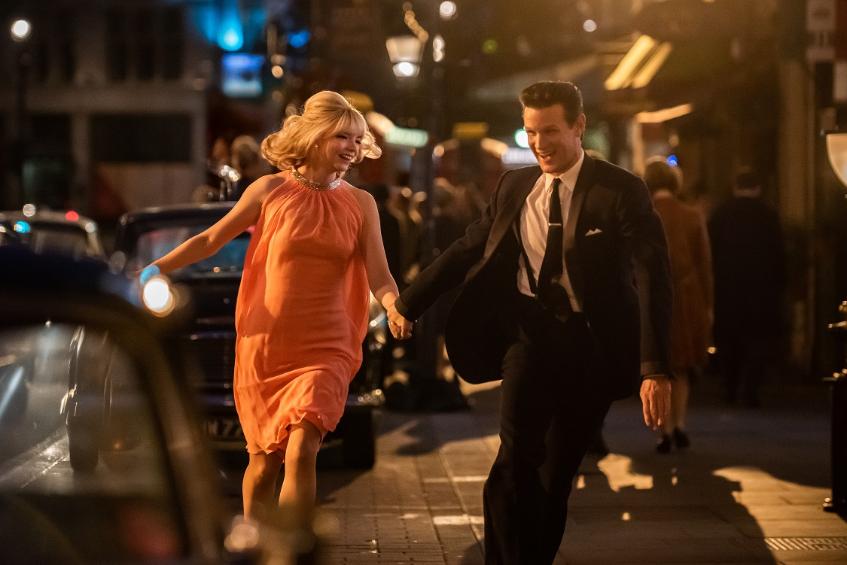 Who would have thought that the director of Shaun Of The Dead and Hot Fuzz would give us one of the most beautiful looking and enjoyable films of 2021, not me for starters, but that’s just what Edgar Wright’s Last Night In Soho is. Every shot, with its sumptuous kaleidoscope of brash sixties colours, a great mix of horror and nostalgia and a terrific soundtrack from the period, Last Night In Soho is a film that demands to be seen in a cinema.

The story sees sixties mad 19 year old Eloise (a terrific turn from New Zealand actress Thomasin McKenzie), “as in the song” we’re reminded by one of the films characters, heading from her home in Cornwall to the bright lights of London’s West End to take up a place at a fashion college in Soho.

Heading off with her grandmothers (79 year old Rita Tushingham) words ringing in her ears that “London can be a lot” it’s not long before she finds that London can indeed be a lot as her first encounter with a sleazy London cabbie has her jumping from the taxi and taking cover in a local shop. Set up with a roommate (Synnove Karlsen) who could be straight out of the cast of Mean Girls Eloise does a runner from the student flat ending up in a bedsit run by an elderly single woman (82 year old Diana Rigg in her last role).

On her first night in her new accommodation she dreams that she’s back in the sixties, ending up in a nightclub where Cilla Black is singing. It’s in this nightclub where she starts to take on the alter ego of an aspiring singer called Sandie (Anya Taylor-Joy).

Sandie’s star starts to rise, helped by a rogue called Jack (Matt Smith) so does Eloise whose clothes designs inspired by her trip back to the sixties start to get her noticed at the fashion college.

Unfortunately for Eloise the more she travels back to the sixties the darker Sandie’s life becomes. And just as Sandie’s life becomes a nightmare so does Eloise’s as she starts to have more and more horrific nightmares leading her to believe that Sandie might have stayed in the very room that’s she’s now staying in and that something sinister might have happened to her.

With a wonderful cast, an eerie Terrence Stamp, 83, plays a pivotal role as a sleazy old gentleman that hangs about the bar where Eloise works in the evening, and a terrific storyline Last Night In Soho is highly recommended, and coming from the man who brought us Hot Fuzz, who would have guessed that.