A new collaboration with the curated film streaming service MUBI, ‘MUBI REMIX’ makes messages out of movies in a custom video messaging app available for free now on iOS

Working in partnership with musical artist and composer Miyu Hosoi, Yuri’s Crowd Cloud is being installed at Haneda Airport in Japan from now until August as part of the country-wide Culture Gate exhibition

Yuri Suzuki, the UK-based experience designer and Partner at the world-renowned independent design studio Pentagram, has launched the first of his two major international projects for 2021.

Created in collaboration with curated film streaming service MUBI and creative technology studio Counterpoint, MUBI REMIX is a new app that allows users to create and share customised video messages, made from movies. With MUBI REMIX, users can simply type in a message, choose a genre , and then watch as it's brought to life in a video that can be shared as a link or on social media. Content created by other users can also be watched on the REMIX feed in the app.

Yuri Suzuki and team worked closely with Counterpoint to create a uniquely playful way to send digital messages. Users of MUBI REMIX can create bespoke messages composed of fragments taken from numerous films from across the MUBI catalogue. Users simply type in a message, choose a music genre, and then watch as it's brought to life in a video that can be shared as a link or on social media. Content created by other users can also be watched on the REMIX feed in the app.

This month also sees the long-term installation of Crowd Cloud, a partnership between Yuri and musical artist and composer Miyu Hosoi, in Haneda Airport, Japan. Part of the Culture Gate exhibition, which sees contemporary artists and creatives offer fresh interpretations of Japan’s diverse culture in airports across the country, Crowd Cloud embraces and enhances the unique sonic character of the Arrival Hall, its ineffable mixture of words, noises, tones, and tempos that can be immediately felt, even before being recognized and understood. Keeping the human voice at its core, Crowd Cloud distills the vowels of the Japanese language to create a unique composition which emanates from a choir of dozens of standing horns, conversing with each other like people waiting for friends and relatives.

Culture Gate is sponsored by the Agency For Cultural Affairs, Government of Japan.

These two projects mark the beginning of a busy year for Yuri and Pentagram, with more installations and products to be launched over the coming months. 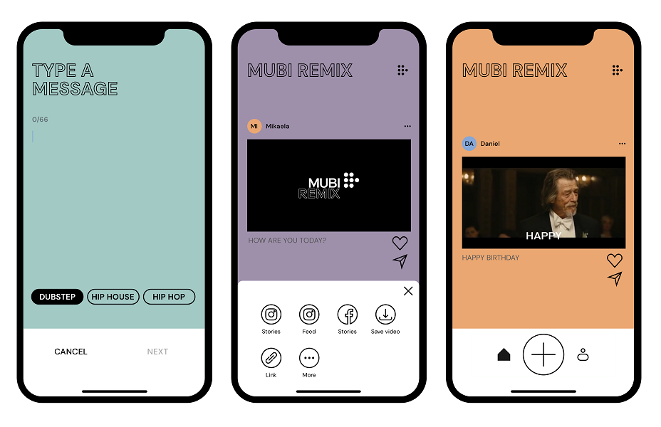 REMIX is a new app that lets you create and share custom messages, made from movies. Simply type in a message, choose a score, and watch as it's brought to life. Send your messages directly to friends and family — or share them with the world.

• Score your messages with a choice of different music themes

• Browse content created by other users on the REMIX feed

REMIX is an app by MUBI, the curated streaming service with an ever-changing collection of hand-picked films. Beautiful, interesting, incredible movies — a new one, every single day.

You can download the free app here ‎MUBI REMIX on the App Store (apple.com)

“Since the pandemic, the importance of telecommunication has increased for everyone, but people are tired with dry text messaging and video conferencing. With MUBI we came up with the idea to create a uniquely playful way to contact friends, family and fellow film fans. We hope to bring back the fun, wit and charm that communication can have, adding spice to your daily life.

The mission of Crowd Cloud is to look at how we can welcome people into the gates of Japan. To quote the curator of Culture Gate, Paola Antonelli, Japan is the far East from everywhere and that was my starting point. The Japanese language contains a strong vowel sound which is unique to Japan and gives it an exotic, curious feel. The sounds of the installation will never repeat, so each visit to and experience of Crowd Cloud will bring a new sound and atmosphere.”