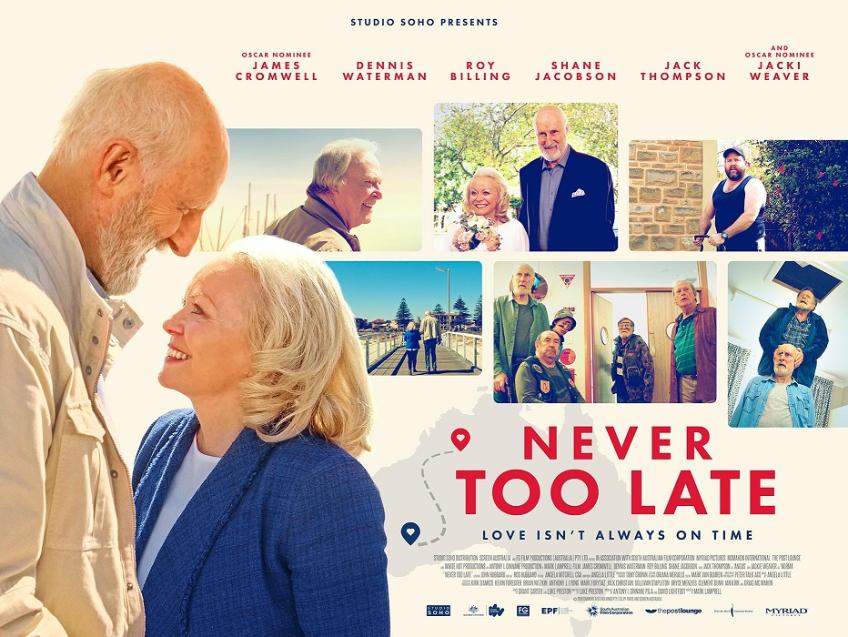 Never Too Late, a story about four old ex-soldiers staying in an Australian retirement home might not seem like the best idea for a light-hearted, feel-good, elderly love story but despite the less than appealing storyline director Mark Lamprell manages to come up with a little gem of a movie, a sort of a mix between The Great Escape and One Flow Over The Cuckoo’s Nest. Lamprell even manages to include a survivor of the original great escape, the actual escape from the German prison camp not the 1963 film, amongst the care homes residents.

Lamprell’s story begins with Jack Bronson (James Cromwell) feigning a stroke so that he can be admitted to the Retirement Home for Returned Veterans. The reason being that he wants to meet up with Norma McCarthy (Jacki Weaver) who he hasn’t seen for over 50 years but who he is still in love with.

The problem for Jack is that before he can declare his love Norma, who is in the early stages of Alzheimers, is whisked off to another care home leaving Jack trapped in secure confines of the retirement home.

Luckily for Jack also resident within the care home are his is old army buddies. Previously known as 'The Chain Breakers' after having escaped a torturous Vietnamese POW camp Jack and his reunited pals, including Jeremiah Caine (Denise Waterman), James Wendell (Roy Billing) and Angus Wilson (Jack Thompson), get together, despite their various age related illness, so that they can get Jack out of the fortress of a retirement home and reunite him with his lost love.

Never Too Late is guaranteed to melt the hardest of hearts and is certainly worth searching out either on its limited cinema release or on digital download.