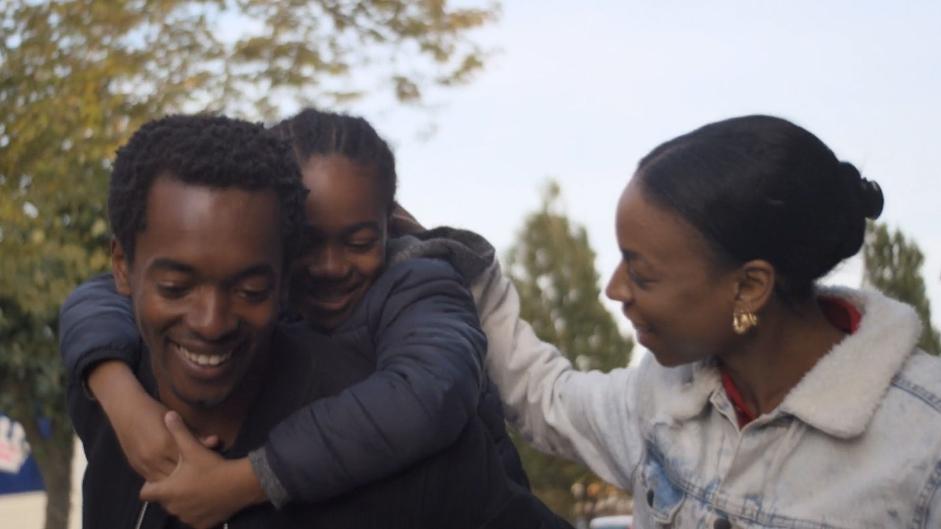 Aki Omoshaybi makes a more than promising debut as a director in his first feature film Real, which he also stars in, wrote and produced

Real begins in a newsagent, the newsagent is set between a courthouse and a business centre, where a young girl (Pippa Bennett Warner) is buying some groceries. As she pays for the goods she’s told that her card has been rejected. Standing behind her is a smartly dressed young man who offers to pay. Outside the shop the pair exchange pleasantries, he tells her that his name is Kyle and that he’s a solicitor in the adjacent courtroom whilst she tells him that her name is Jamie and she’s a team leader at the local business centre. The pair exchange phone numbers and part.

However the truth couldn’t be further from the lies that both have spun to each other as she works in a supermarket, is a recovering alcoholic, has a young son, who the social work are keeping a close eye on, and she’s skint. Meanwhile Kyle is jobless, he’s forced to ask his mother for shelter, a mother who despises him and takes great pleasure in telling him that he’s useless, selfish and will amount to nothing, and rather than being a solicitor he was in fact at the court because of his criminal background.

The pair ultimately meet up, first as friends, their first “date” is at a posh restaurant where Kyle is forced to sell drugs outside to a friend so that he can afford to finance the costly meal.

Needless to say their relationship is built on a bed of sand and the more their romance blossoms the more complex their lies become.

Omoshaybi has fashioned a love story, thanks in no small part to two wonderful performances from Aki Omoshaybi & Pippa Bennett Warner, that is both touching and sad.

The short running time, it’s only 77 minutes long, does make the ending feel a bit rushed but other than that Omoshaybi film is an impressive debut feature and comes highly recommended.