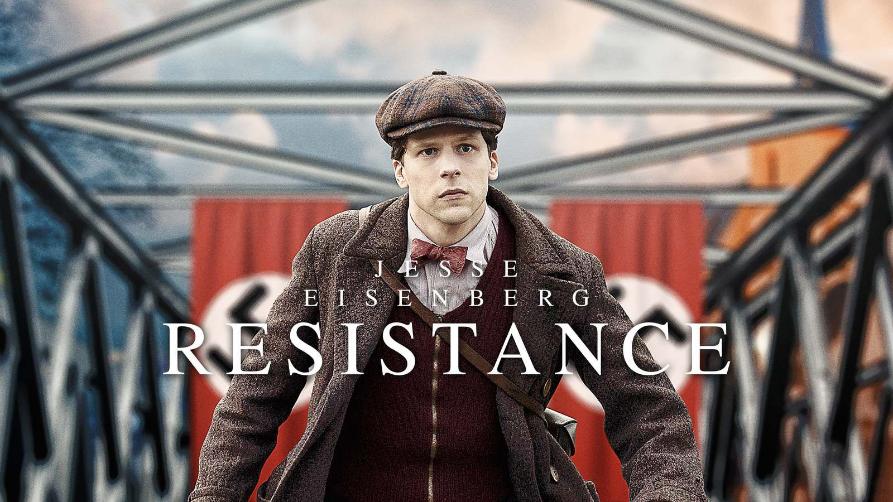 Most people who have heard of Marcel Marceau will know him as the famous French mime artist, few, I imagine, will know that he was actually born Marcel Mangel the son of a Jewish butcher, who, during World War II joined the French Resistance and helped thousands of orphaned Jewish children escape the clutches of the Nazis.

Beginning in 1938 just prior to the start of the war, Marcel Mangel, (Jesse Eisenberg), as he was known then, is living in a town on the French/German border. Wanting to be a famous clown, he performs in local theatres giving impressions of Charlie Chaplin, Mangel is more interested in himself than he is in helping others.

Mangel’s life changes when orphaned Jewish children arrive from Germany. Put up in a local castle Mangel uses his clown routine to entertain the children and distract them from the horrors that are going on around them.

As war is declared the children and Mangel are evacuated to the South of France.

After the South of France is overrun by the Nazis and the children’s chances of survival diminish by the day Mangel, now called Marceau after he doctors his passport, along with other members’ of the resistance decide that they must get as many children out of France and to the safety of Switzerland as they can.

Marceau’s life story is certainly one worth telling even if it’s slightly flawed as is the case with Resistance. This is perhaps down to the casting of Eisenberg who at no time looks comfortable in the role, his awkward attempt at mime makes it difficult to believe that Marceau, as the caption states at the end of the film, was to go on and become the greatest mime artist the world had ever seen.

A story that involves rescuing children whose lives are in danger should make you feel that the lives of the children are hanging in the balance, with the exception of a few scenes, which come mostly towards the end and stretch credibility, there’s very little tension throughout the film.

Whilst Eisenberg’s performance might be questionable Matthias Schweighofer is great as the tyrannical and sadistic Gestapo chief Klaus Barbie as is Clémence Poésy who plays Emma, a member of the resistance and the object of Marceau’s affections.

An enjoyable if somewhat underwhelming watch.