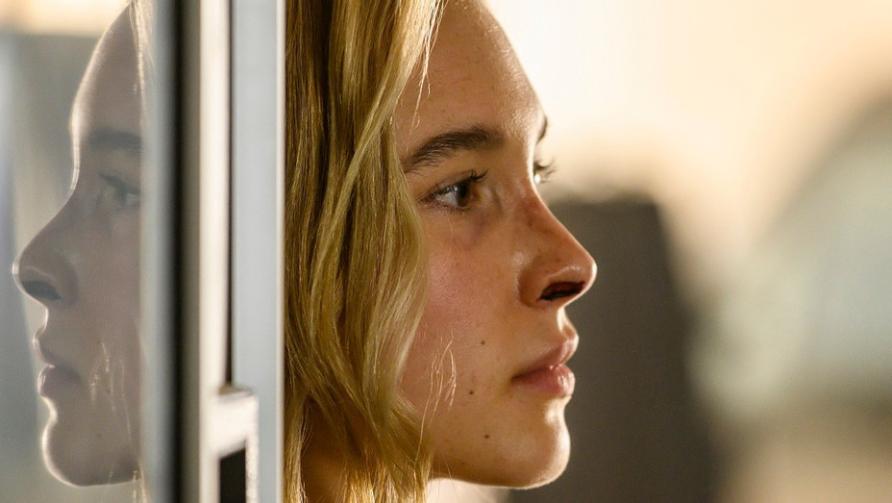 Having to review a film that is set in a school where a number of pupils return and slaughter some of their class mates with firearms is a difficult one. Do you take it as a piece of entertainment or do you debate the moral rights about making such a film. Let’s be honest there are going to be a lot of people who are going to have negative opinions, and their possibly justified, about director Kyle Rankin’s Run Hide Fight.

The premise sees Zoe (Isabel May), after bashing a deer’s head in with a rock whilst out shooting with her dad (Thomas Jane), the bullet didn’t do the job so that’s apparently what you do, and wearing a green army jacket suspiciously similar to the one John Rambo wore in Rambo, are we getting the idea that Zoe might be a bit of a bad ass, heading to school with best pal Lewis (an underused Olly Sholotan, but we’ll come to that later).

The pair aren’t at school long when, just as Zoe has left the canteen after an argument with Lewis, a van is driven through the cafeteria windows. Out from the van come four students, led by the disgruntled Tristan Voy (Eli Brown who is rather good) who start to shoot pupils and staff.

As Tristan and his gang make their demands it’s up to Zoe to rescue her schoolmates and save the day. Where are the police you might add? Fair point, led by the local Sherriff (Treat Williams) their so incompetent it verges on the comical.

The plot is so full of holes it makes you wonder if anyone really cared about quality, Tristan demands all the surviving pupils’ film him over social media, which, much to the horror of the parents who see their nearest and dearest being brutally murdered, the TV Networks actually broadcast. Poor Lewis, I told you we would come back to him, is forced to follow Tristan about and film him as he barks his demands at the increasing number of viewers watching on social media channels. Oh and I nearly forgot, Zoe is given inspiration for her rescue by conversations she has with her recently deceased mother (Radha Mitchell).

It wouldn’t be so bad if Run Hide Fight was played out with its tongue firmly in its cheek but it’s not, it’s portrayed as an action film, Die Hard in a school, really!!! If this is the best that film makers’ can come up with for ideas we’re really in trouble.