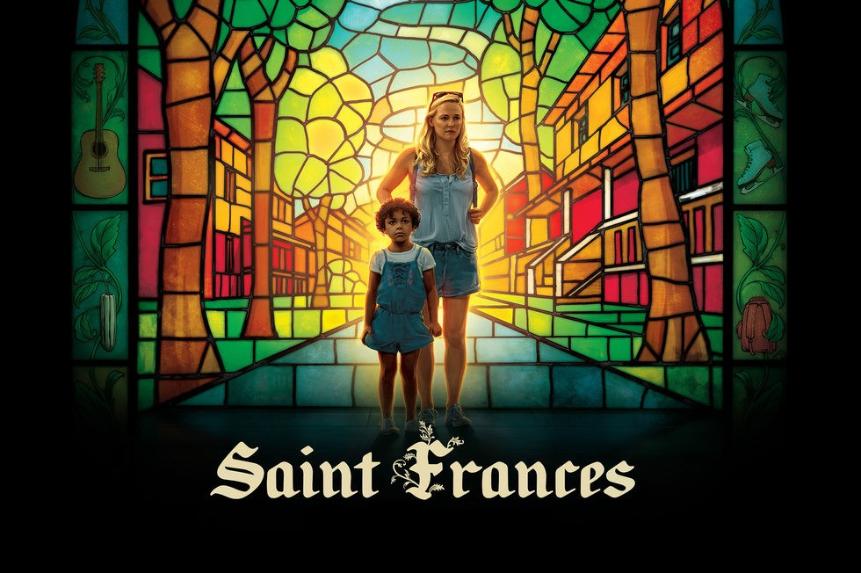 Saint Frances opens with a scene at a party where a male guest is talking to a female called Bridget (Kelly O’Sullivan) about a dream he had. In his dream, he explains, his life is entirely different from the one he has at present. He has no family, he stays alone in a shitty one bedroom flat and depressed with life he throws himself out the flat window killing himself. Bridget asks him why, to which he replies “I realised my life is meaningless, I never started a family, I never made any choices or moves of any kind, I’m 34, jobless broke, totally alone, full of self-loathing. I hate myself, so I kill myself” He then asks her what she does, to which she replies “I’m a server”. Don’t worry the male tells her “you’re in your 20’s” “I’m 34 she tells him” His last words to her as he walks away are “you look good”.

The sad thing about this opening scene is that we can see in Bridget’s eyes the realisation that, perhaps, the males dream is actually her own life.

Spurred on by her conversation and more upbeat after meeting a male (Max Lipchitz) at the party Bridget applies for the summer job as a nanny for 6 year old Frances (Ramona Edith Williams). Frances mothers Maya (Charin Alvarez) and Annie (Lily Mojekwu) have just had a second child and need help with their energetic 6 year old.

The last person you would give a job to as a nanny to would be someone that doesn’t like children and has no paternal instincts whatsoever but, somewhat surprisingly, Bridget gets the job.

Not realising what she’s got herself into as well as dealing with a precocious 6 year old Bridget has to deal with, not only her own pregnancy and subsequent abortion, but Francis parent’s deteriorating relationship.

First time director Alex Thompson has managed to craft a film, thanks in no small part to wonderful performances from both Kelly O’Sullivan and Ramona Edith Williams, that’s both touching and moving.

If you’re planning on taking a trip out to the cinema make sure you catch this wonderful and heartfelt film. Highly recommended.