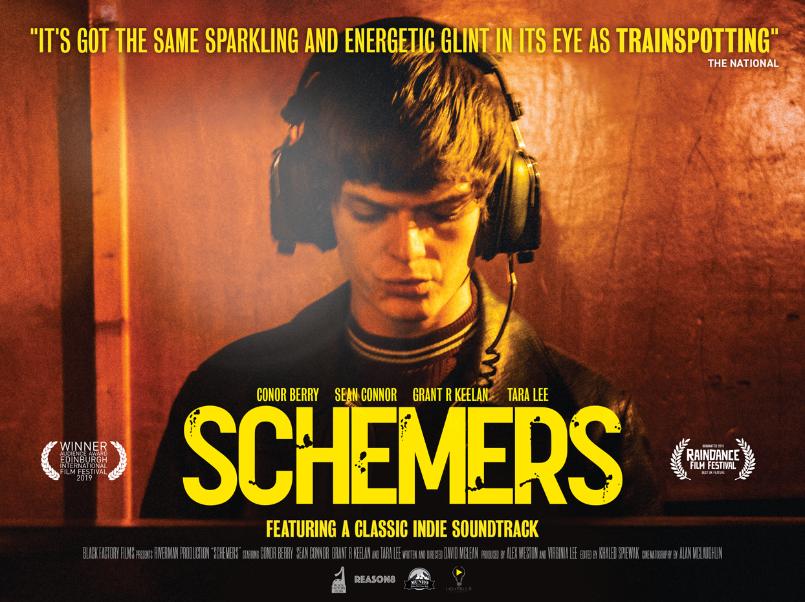 Winner of the Audience Award at last year’s Edinburgh Film Festival Schemers is based on the fascinating true story of Dave McLean (who is also the director and scriptwriter). McLean in the 80’s set up various gigs in Dundee that featured up and coming bands such as Simple Minds, XTC, Ultravox, The Skids & Iron Maiden.

You might wonder what’s so fascinating about the life of a music promotor. The answer is that McLean wasn’t your average music promotor but rather an unemployed schemer from a council estate who along with two friends manage to convince the bands that coming to Dundee would be a good idea for their careers. Even the name of their promotion company Twa Bridges reeked of amateurism having been made up as they drank wine and smoked dope whilst looking at the two bridges that cross the Tay River in Dundee.

Filmed in and around Dundee using mostly local talent, Conor Berry, who was awarded best actor at the New York Winter Film Awards for his performance, makes an outstanding and accomplished screen debut as David McLean,

The story, which wouldn’t look out of place in a Guy Ritchie film, sees McLean and his pals Scott (Sean Connor) and John (Grant Robert Keelan) constantly hustling with local gangsters to arrange money and venues to put on their gigs. In amongst their wheeling and dealing Mc Lean has to deal with his off on relationship with his girlfriend Shona (Tara Lee).

With its pulsating soundtrack and energetic performances from its enthusiastic cast Schemers is a funny, touching and fascinating insight into the Scottish music scene in the early 80s.

Schemers is a rare ray of light in the current dark cinematic landscape and comes highly recommended, don’t miss.