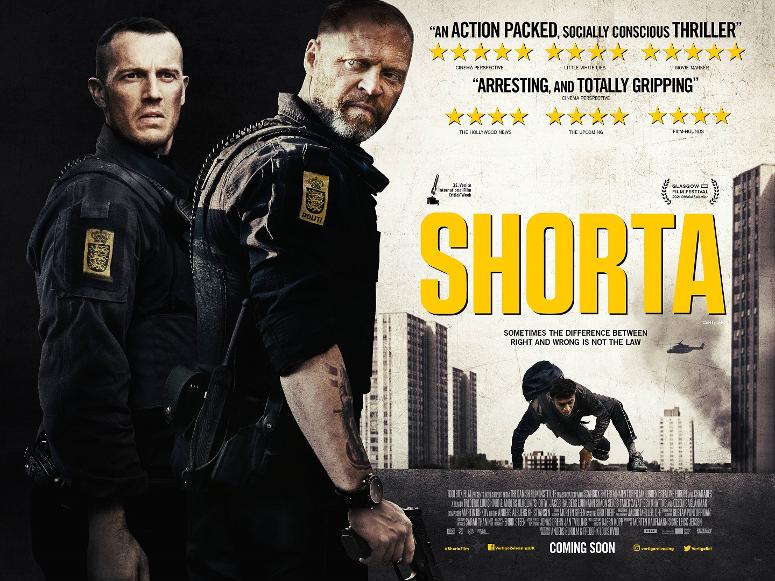 If you thought Denmark was some kind of crime free oasis in a world of violence and crime watching director’s Frederik Louis Hviid and Anders Ølholm debut movie might change your mind.

Shorta, Arabic for police, begins with a black teenager face down on the ground with a police officer’s knee on his back. Crying out that he can’t breathe the next thing we know it’s being reported on the local news that the boy is in intensive care and fighting for his life.

It’s against this back drop that two police officers begin their shift and are sent out on patrol together. As outsiders looking in it’s fairly obvious that Jens (Simon Sears) is the good cop whilst his partner, Mike (Jacob Hauberg Lohmann) is a bully and a racist, the bad cop if you like.

Warned by their superiors to stay out of Svalegårdena, the estate where the critically ill boy stays, Mike decides that he knows better and enters the no go zone.

As racial tensions start to bubble up on the scheme things take a turn for the worst for the pair after Mike stops and searches a young Arab called Amos (Tarek Zayat). Just after arresting the boy word starts to filter through that the injured boy is dead leading to gangs of black teenagers to start taking their vengeance out on anything that comes in front of them. Unfortunately for Mike and Jens that is them and their forced, along with the now arrested Amos, to play a deadly game of cat and mouse through the housing scheme.

Shorta is very similar to the recent French movie Les Miserables, not the musical but the 2019 thriller, both cover the same idea of cops trapped in a housing estate where the residents are out for their blood. Of the two I would say that Shorta, despite its slow start, has the edge in terms of how enjoyable it is. Despite its slow build up the last 45 minutes is an adrenaline filled thrill that will have you sitting on the edge of your seats.