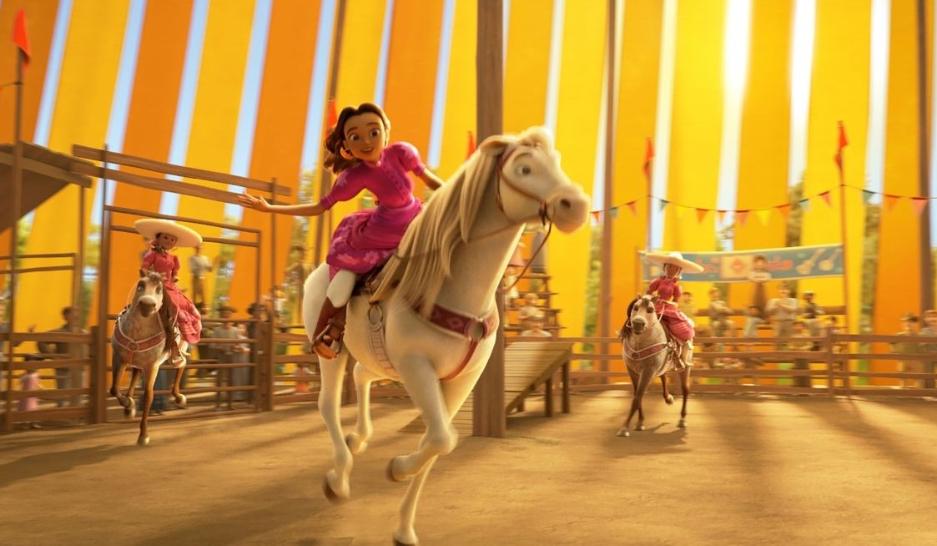 If you can remember back to 2002 Spirit: Stallion Of Cimarron was a mediocre animated movie that eventually spawned a TV series that appeared on Netflix. Now, with characters from the said TV series, comes the uninspiring and drab Spirit Untamed.

With animation that isn’t even a step up from a cheap TV series and a story that tries too hard to be modern, the young female characters are meant to be feisty where in reality they're not particularly likeable, Spirit Untamed has to rank as one of the poorest animated movies to come out of the normally reliable Dream Works Animation Studio, this after all is the studio that brought us Shrek and How To Train Your Dragon.

Set in the Wild West the story begins, cheerily enough, with the death of Lucky Prescot’s (Isabela Merced) mother, a fearless horse-riding stunt performer. Now staying on the east Coast with her aunt (Julianne Moore) Lucky, after one too many adventures, is taken across country in order to stay with her father (Jake Gyllenhaal) in the sleepy western town of Miradero.

In Miradero Lucky befriends Spirit, a wild mustang. When a heartless horse wrangler and his team plan to capture Spirit and his herd it’s up to Lucky and her friends to free the stallion from the evil rustlers.

If you enjoyed the TV series, then you might enjoy Spirit Untamed for everyone else this is something that you’ll want to avoid.