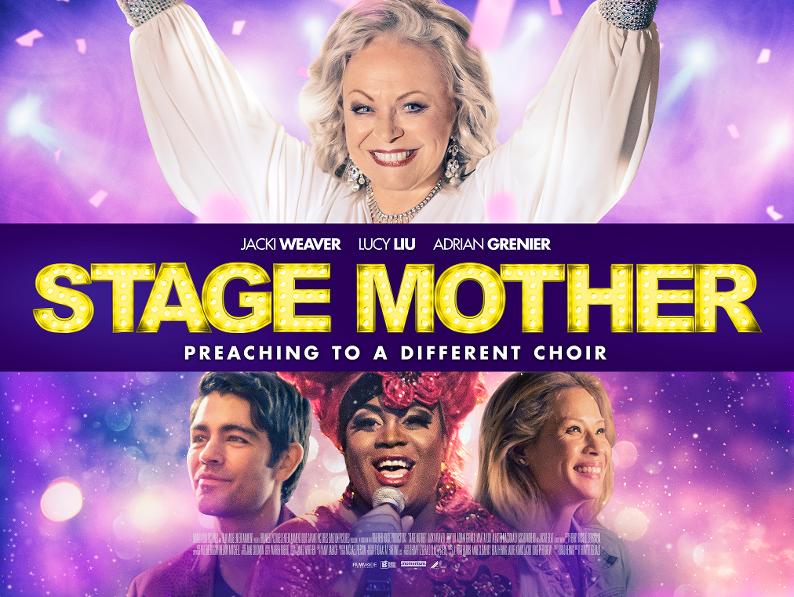 Stage Mother begins with two contrasting scenes from two very different worlds. The first shows us some elderly women singing in a choir in a southern Texas Baptist church the other, on the flip side of the coin, has a drag artist in a drag bar in San Francisco dropping dead on stage from a drug overdose.

The connection it transpires is that one of the elderly members of the choir happens to be the mother of the dead drag artist.

Estranged from her son, for more years than she cares to remember, as a result of her husband (Hugh Thompson) disowning him due to his lifestyle choices, Maybelline (Jackie Weaver) decides to head to San Francisco to attend her son’s funeral.

Shocked at first by what she sees, the funeral in a church is just a mirror image of the drag bar, Maybelline, who’s in her 70’s, is even more shocked when she, as her sons next of kin, finds out that she’s inherited the drag bar.

Seeing the potential in the underperforming bar and its employees Maybelline, along with her sons husband and business partner (Adrian Grenier), takes on the task of turning around the fortunes of the bar in an effort to save it from bankruptcy.

In amongst the sequins and pearls there’s a dark touch to Stage Mother as Maybelline deals with her staff and their various personal problems. Characters with names such as Cherry Poppins (Mia Taylor), Dusty Muffins (Jackie Beat) they all have various issues ranging from domestic violence, family troubles and drug abuse, all of which Maybelline deals with a twinkle in her eye and a winning smile.

Filmed in Nova Scotia , Canada but set in San Francisco, stock footage gives a tourist eye view of San Francisco, Stage Mother is certainly predictable but with its well-choreographed musical numbers and a sparkling performance from the effervescent Weave, Stage Mother might not be highbrow entertainment but a film that could be described as a cross between The Golden Girls and The Adventures of Priscilla, Queen of the Desert is a lot of fun and certainly worth 90 minutes of your time.