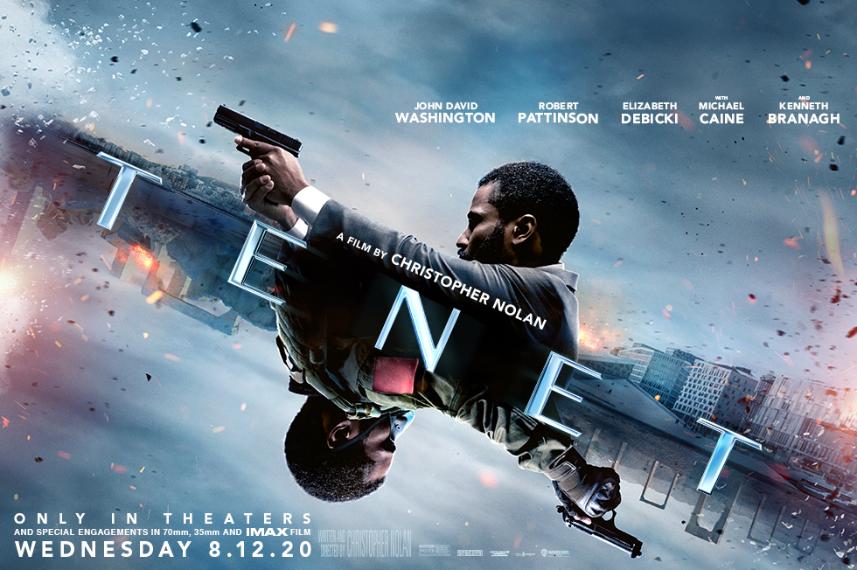 With most cinemas re-opening after the Covid lockdown great hope has been placed on director Christopher Nolan’s Tenet to get people back into the limited seats that cinemas have available.

The big question is, is it any good? Having seen it in all its glory on a giant IMAX screen the answer would probably be yes. I say probably and by that I mean, if you’re a fan of Nolan’s previous films, particularly Inception and Memento as both have the same feel in terms of head scratching plots, you’ll love it. If you’re not a fan then I’m not sure if his method of storytelling is going to win you over.

The plot, which for the first hour or so is all a bit confusing, sees John David Washington playing a secret agent known only as The Protagonist. Recruited by a secret organisation his task, as explained by a white coated scientist (Clémence Poésy), is to stop our ancestors at some time in the distant future from destroying the world in our present time.

Our distant relations it would seem have managed to “invert” time and have sent back objects that are traveling backwards through time, some of which, if found, will result in the destruction of mankind. Confused? I certainly was and it’s as if Nolan tips a wink to that fact as Poésy’s scientist tells The Protagonist “Don’t try to understand it. Feel It”.

The Protagonist is no sooner told about the end of the world plot when he’s briefed in a London restaurant by Nolan’s favourite go to actor (Michael Caine in a small cameo role). His task, aided by a British spy called Neil (Robert Pattinson), is to liaise with an evil Russian arms dealer (Kenneth Branagh), who might or might not know something about our future selves plan, and in order to do this he has to gain the trust of his wife (Elizabeth Debicki) who is trying to escape her abusive marriage.

Nolan is not a film maker who is known for is subtly and so it proves with Tenet. The further we travel down the rabbit hole the more bonkers the story gets and the bigger the set pieces become, Jumbo jets crash into buildings whilst objects, including cars in a spectacular car chase, move backwards through time. At one point whilst having the chain of events explained to him Neil is asked “if he has a sore head yet?” I couldn’t have put it better myself.

There’s no doubt that Nolan knows that is story is confusing and that’s part of the enjoyment in Tenet, as you slowly start to piece the jigsaw of a plot things start to become clearer, scenes from earlier in the film are revisited and on second viewing the scenes all start to make sense.

Tenet is a film that requires patience, and certainly more than one viewing, in order to get the maximum enjoyment from it as the scientist tells The Protagonist “Don’t try to understand it. Feel it”, believe me it’s good advice.