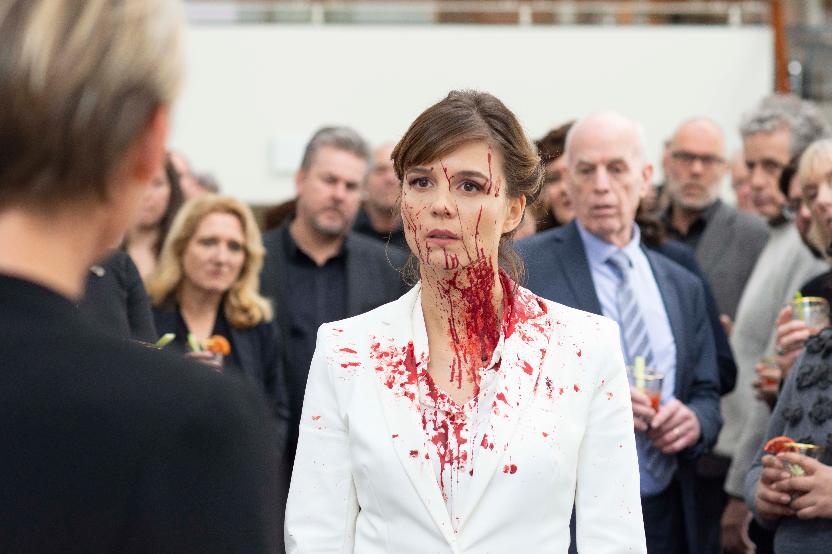 Director Ivo van Art’s The Columnist is a wry and darkly comic look at freedom of speech in today’s society,

Dutch newspaper columnist Femke Boot (Westworld’s Katja Herbers) is a supporter of free speech and writes a controversial column in a Dutch newspaper. As a result of the column she receives death threats daily on social media. Badgered by her publisher to write a new book and suffering from writers block she sits in her home for most of the day, her mood not helped by a DIY enthusiast neighbour who constantly hammers and drills.

After a failed visit to the police, who just tell her to stop looking at the posts, Femke finally snaps. The first target being her neighbour’s new fence which she smashes with an axe. Finding out that her neighbour is one of those posting vile comments he gets summarily dispatched when she pushes him off the house roof as he’s carrying out some DIY.

Spurred on by her first killing, which seems to clear her head and allow her to write, she starts to hunt down those that she feels have wronged her on social media. One victim gets hit over the head with a frying pan whilst another gets electrocuted in his bath tub. All the killings are different except for one constant, she likes to cut off their right index finger which she keeps amongst her frozen peas.

As well as dark humour there’s also wonderful irony in Daan Windhorst’s script. Boot’s teenage daughter, Anna (Claire Porro) is as free spoken as her mother and, encouraged by her mother, she’s constantly getting into trouble at school for her outspoken opinion. When Anna is making a banner with defamatory remarks about the Dutch Royal Family Femke helps her paint the sign.

The Columnist is as much a comment on society today as it is a piece of entertainment, recommended.