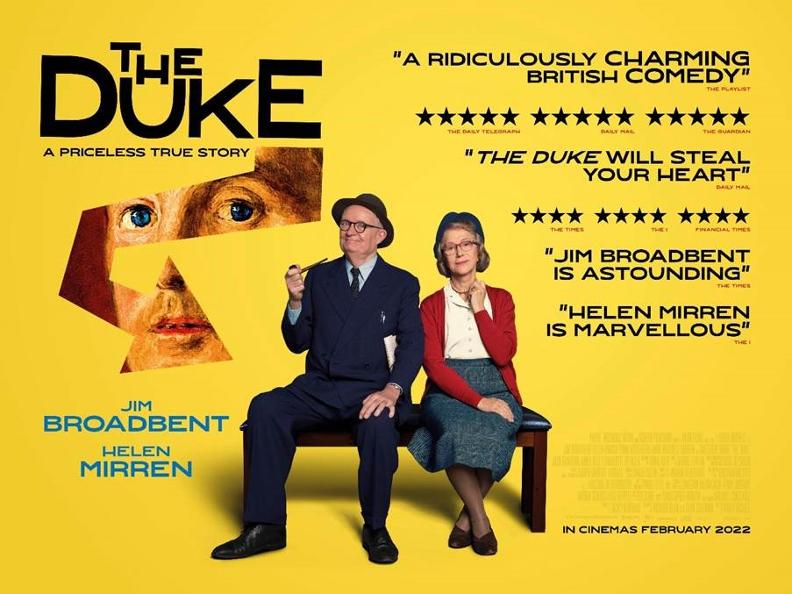 The Duke is based on the true story of Kempton Bunton, a 61 year old retired bus driver from Newcastle upon Tyne who, in 1961, was alleged to have stolen from the National Gallery in London a portrait of the Duke of Wellington by the artist Francisco Goya.

Director Roger Michel’s (perhaps most famous for directing Notting Hill) film is a wonderful period piece that looks, in terms of its sixties settings, absolutely exquisite. Helped in no small part by two wonderful actors in Jim Broadbent who plays Kempton and Helen Mirren who plays his long suffering wife, Dorothy The Duke is everything that is good about British cinema. Much like Kenneth Branagh’s Belfast The Duke has a terrific story and a wonderful ensemble cast.

The story sees Bunton, who is a bit of a socialist and believes that the government should fund free TV licences for the elderly, heading to London to press his case when he sees an opportunity to steal the Goya painting, a painting that the British Government have recently paid over £100000 for, the money that it took to buy the painting he believes could have been spent in a way that would have benefited people.

Alter stealing the painting he takes it back to his home where, with the help of his son Jackie (Fionn Whitehead) he hides it in his wardrobe. The pair then send blackmail letters to the Government. The black mail money he intends, like a modern day Robin Hood, to distribute to good causes.

The Duke is a wonderful feel good film that will melt your heart and have you routing for Bunton long before the final credits roll. An early contender for British film of the year The Duke is simply not to be missed.