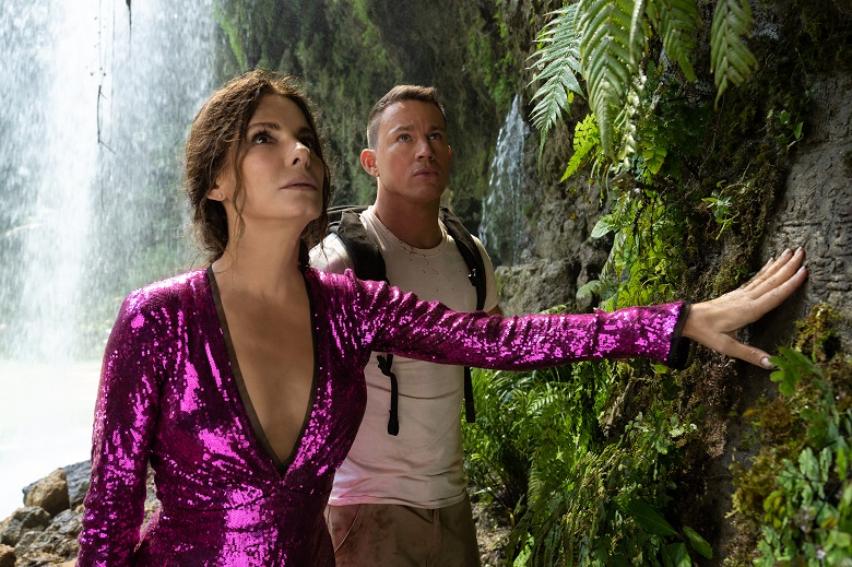 Today’s film makers seem to be obsessed with either making superhero films or depressing dramas with comedies almost forgotten about. Thankfully someone’s still making something that’s going to make us laugh, it might not be that original, Michael Douglas and Kathleen Turner have already covered similar ground as a pair of bickering treasure hunters in Romancing the Stone (1984) and its sequel Jewel of the Nile (1985), but it is a lot of fun.

Sandra Bullock, dressed for most of the film in a purple tight glittering jumpsuit, is Loretta Sage, a reclusive author who is on a book tour with her handsome but not too bright cover model called Alan (Channing Tatum) or Dash if you give him his character’s name in Sage’s book.

As she’s leaving a disastrous book signing event she’s kidnapped by eccentric billionaire Abigail Fairfax (Daniel Radcliffe hamming it up and by the looks of it having the time of his life) who wants Sage to translate an old map that he believes shows the location of a lost city where there is meant to be hidden priceless jewels.

Why he just doesn’t pay her for her service is never really explained, but then again I suppose we wouldn’t have a story. Refusing to help him Sage is whisked away, in Fairfax’s private jet, to an island, in the middle of the Atlantic, where he believes the lost city is located.

Thanks to her smart watch Alan, along with heroic action man Jack Trainer (Brad Pitt), manage to track her whereabouts and head off on a rescue mission which unsurprisingly ends up in a disaster with Sage and Alan stranded in the middle of the jungle with Fairfax and his henchmen out to kill both of them.

The humour in the Lost City isn’t subtle with one set piece, involving leaches, small cars and wheelbarrows, after another being linked by no more than the couple arguing with each other, there’s a lot of jokes about Sage’s choice of clothing and footwear.

The Lost City is by no stretch of the imagine highbrow entertainment but it is a couple of hours of enjoyable nonsense that’s a lot better than some of the gloomy fair that we’ve been fed in cinemas over the last couple of months.