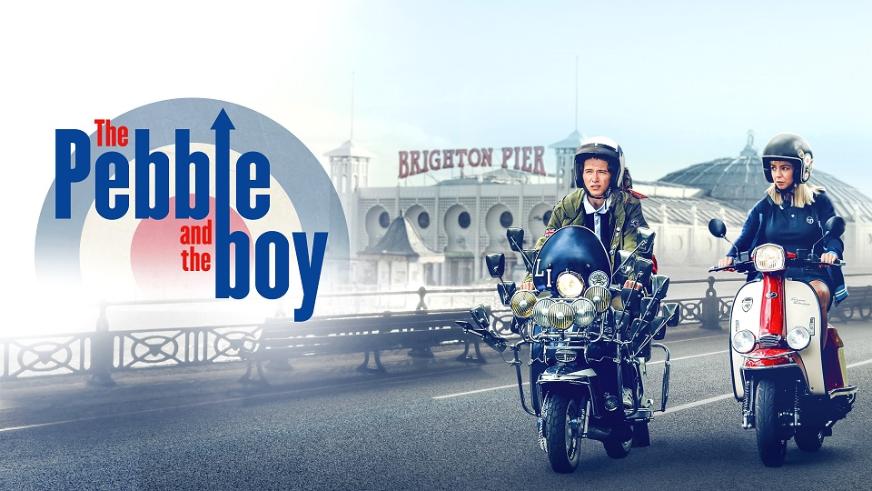 Two movies released this week have very similar themes, both tell the story of a person coming to terms with the death of a loved one and travelling a long journey in order to honour the deceased. Whereas The Last Bus tells the story from an elderly person’s point of view The Pebble And The Boy is a more youthful story, and is the better of the two.

John Parker (Patrick McNamee, Our Girl) is a 19 year old from Manchester who has just lost his father in an accident. Knowing that his father was a dedicated Mod, “once a Mod always a Mod” we’re told on numerous occasions, he decides to take his father’s old Lambretta and transport his ashes to Brighton, the spiritual home of the Mods, and scatter them on the beach.

Not long into the journey the scooter breaks down and he’s forced to stay overnight with a close friend, and fellow Mod, of his father and his rebellious daughter Nicki (Sacha Parkinson, Coronation Street). After finding tickets to a Paul Weller concert that’s taking place in Brighton in a few days John and Nicki, on one of her father’s scooters, decide to head to Brighton together.

The previous mentioned plot line, which is taken up mostly by Parker moping about the death of his father and should he or should he not go to Brighton, takes about over half of the story and it’s so slow it nearly grinds the whole movie to a stop. Thankfully The Pebble And the boy is redeemed in the final third when the trio finally arrive in Brighton and something akin to a story materialises.

Patrick McNamee is good in the main role as John but he’s overshadowed by Sacha Parkinson who is by far the best thing in the movie. Her performance as the street wise Nicki is wonderful, which is more than can be said of Max Boast whose performance is nothing short of bizarre

Touching and moving with a great sound track from Paul Weller, The Jam, The Style Council, Secret Affair and The Chords, the title of the film is taken from the final track on Weller’s eighth studio album, As Is Now, The Pebble And The Boy might not be Quadrophenia but it’s nevertheless an enjoyable and worthy entry in the short genre of Mod movies.