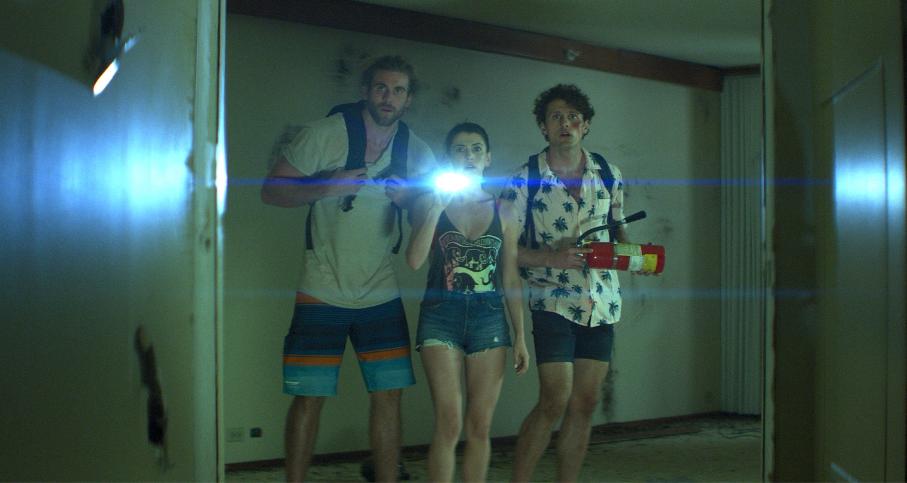 Lex (Bianca Haase), a writer obsessed by paranormal activity, is taken by her three friends (Brock O'Hurn, Michael Vlamis and Michelle Randolph), as a birthday treat, to a deserted Hawaiian island where the only hotel has been abandoned by the locals due to it being allegedly haunted by a ghost known as The Half-Faced Girl.

Taken by helicopter to the island where on arrival the pilot warns them to stick to the paths, be back at the rendezvous point by a certain time and most importantly don’t get lost as, unsurprisingly if you are a follower of horror movies, the island has no mobile phone coverage.

Needless to say the quartet take none of his advice on-board leading them inevitably to having strange eerie encounters within the long abandoned hotel.

Written and directed by Taylor Chien, whose previous work has mostly been limited to TV, The Resort takes what feels like an eternity to get going. With a running time of only 75 minutes Chein lets his story get bogged down in so much preamble that the inevitable conclusion feels rushed and largely unsatisfying.

The Resort is B horror in every way, its limited budget being made all the more obvious by some pretty ropy special effects towards the end. However its short running time and enthusiastic cast just about ensures that The Resort doesn’t outstay its welcome.