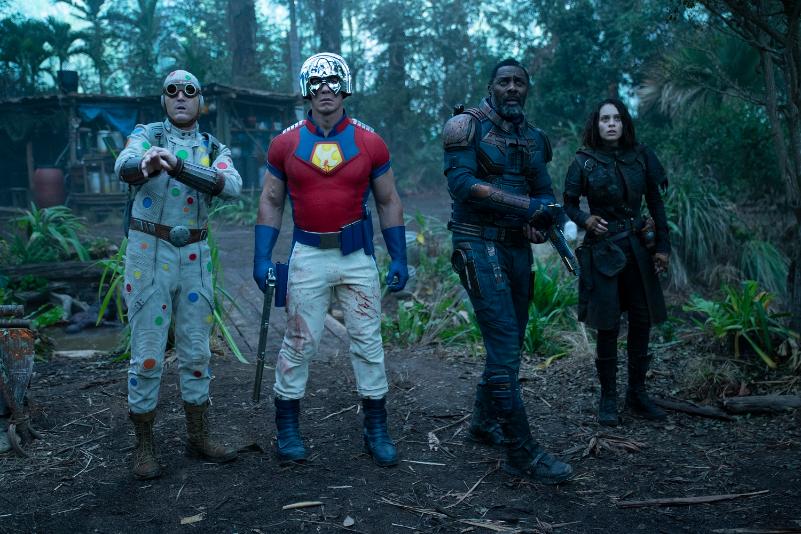 Is The Suicide Squad a sequel or a remake? I would argue that it’s more of a reboot. It carries the same genes and some of the same cast as Suicide Squad (2016) but on the whole it’s entirely different beast.

The story is pretty similar to before. Belle Reve is a prison in the USA where the worst super-villains are kept and it’s from here that Amanda Waller (Viola Davis reprising her role from the 2016 movie) plucks a motley crew of cons, including Bloodsport (Idris Elba), Peacemaker (John Cena), Captain Boomerang (Jai Courtney), Ratcatcher 2 (Daniela Melchior), Savant (Michael Rooker) and King Shark (Sylvester Stallone), and sends them on a suicide mission to a remote South American island called Corto Maltese.

Once on the island and after a bloody battle that sees a number of supervillains hilariously and brutally dispatched to wherever dead supervillains go the survivors meet up with Harley Quinn (Margot Robbie) and Colonel Rick Flag (Joel Kinnaman, another survivor from the first movie). Their task now is to make their way to the centre of the island where in a secret lab an evil scientist called Thinker (Peter Capaldi) is weaponising an alien creature called Starro.

If it all sounds a bit crazy that’s because it is, but in a good way, director James Gunn (Guardians Of The Galaxy) injects so many characters and so much story into the movies running time a second viewing is almost required to take in everything that’s going on. A superhero movie hasn’t been this much fun since Thor Ragnarok (2017) and you just wonder how much influence that movies director, Taika Waititi had on The Suicide Squad, especially since he himself pops up in a small role.

With so many characters to juggle in his story Gunn has managed to flesh out every one of them to such a degree that each in their own right contributes to the movie’s plotline, no one character dominates proceedings, although Margot Robbie as Harley Quinn just about manages to steal the show.

The Suicide squad is a great fun and feels like a breath of fresh air after the disappointment of Wonder Woman 1984. Don’t miss.