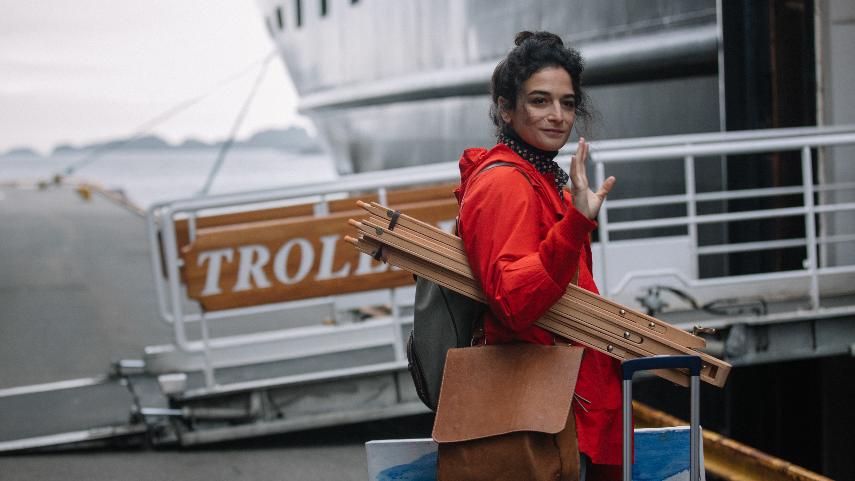 Based on the novel of the same name by Rebecca Dinerstein, who also wrote the screenplay for the film, The Sunlit Night is a story about how far (literally) a person might go in order to find themselves.

The person in this case is budding American painter Frances (Jenny Slate) who, after having her most recent painting torn to shreds by a trio of pompous critics and finding that her elderly parents (David Paymer and Jessica Hecht) are planning on divorcing, heads to Norway to take up a painting job as an apprentice to a bad tempered and hard drinking artist called Nils (Fridtjov Saheim).

When she gets there she quickly discovers that it’s not quite as glamorous as she thought it might be, the painting that she’s asked to do involves a giant painting by numbers project where a barn is the artists canvas, and instead of the bright lights of Oslo she’s stuck in a caravan in the middle of nowhere with only a few goats and the employees of the local Viking museum, which is bizarrely run by an American (Zach Galifianakis), for company.

The Sunlight Night is a mostly a fish out of water story, which sees Frances adapting to her new environments, blended with a strange subplot that sees Gillian Anderson, in a very small cameo, popping up as the Russian mother of a young American (Alex Sharp) who turns up in the area in order to give his dead father, and her husband, the Viking funeral that he so wanted.

The Sunlit Night’s slow moving often pedestrian storyline won’t be for everyone, however a fine performance from Jenny Slate, some beautiful photography of the Norwegian countryside and some genuinely touching moments just about do enough to make The Sunlit Night an enjoyable watch.