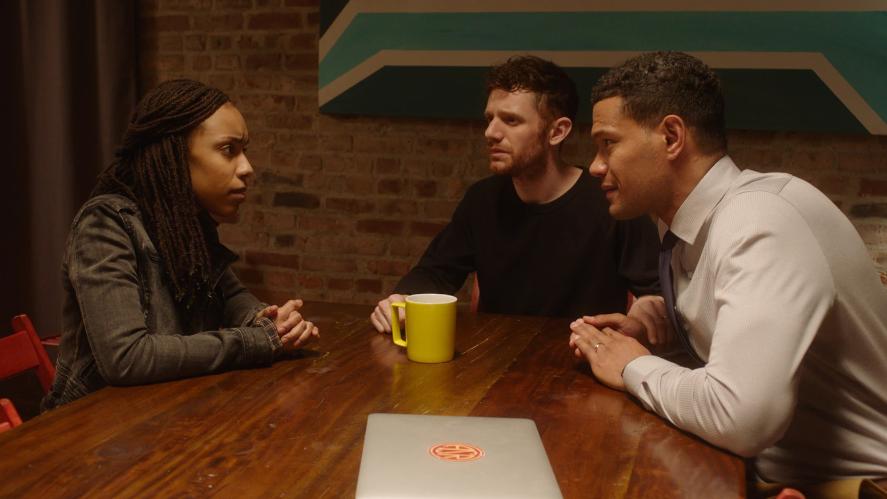 Writer-director Jeremy Hersh debut feature is an impressive if somewhat talky drama about how life can sometimes throws you a curve ball no matter how well you’ve planned things out in your mind.

The Surrogate follows Jess Harris (an impressive Jasmine Batchelor), a 29 year New York old-web designer whose life is in a bit of a rut. Unappreciated by her boss at a not for profit organisation and not altogether happy in her current relationship with her boyfriend she’s delighted to find out that she’s pregnant, not to her current boyfriend, but as a surrogate egg-donor for her best friend Josh (Chris Perfetti) and his husband Aaron (Sullivan Jones).

Delighted with the news and with everything in place legally to hand over the child to the new parents the trio get the bombshell news, when Jess goes for a twelve week prenatal test, that the fetus has tested positive for Down syndrome.

From here on Hersh’s movie splits into two different camps. Jess embraces the fact that she’s going to have a child, she attends help groups with other Down syndrome parents, whilst Josh and Aaron start to have doubts about wither or not they now want to go ahead with the birth. Ultimately with each party pulling in different directions cracks start to appear in their once solid relationship.

Hersh could have made a movie that preaches about either the ethical rights or wrongs of the characters decisions but instead he comes up with a well-balanced and open view about the dilemma and the choices faced by each of his central characters. The first half can be somewhat slow as the characters are left to ponder their options. However the narrative, helped in no small part by a wonderful performance by Jasmine Batchelor, picks up in the second half making for a highly enjoyable and moving piece of filmmaking.