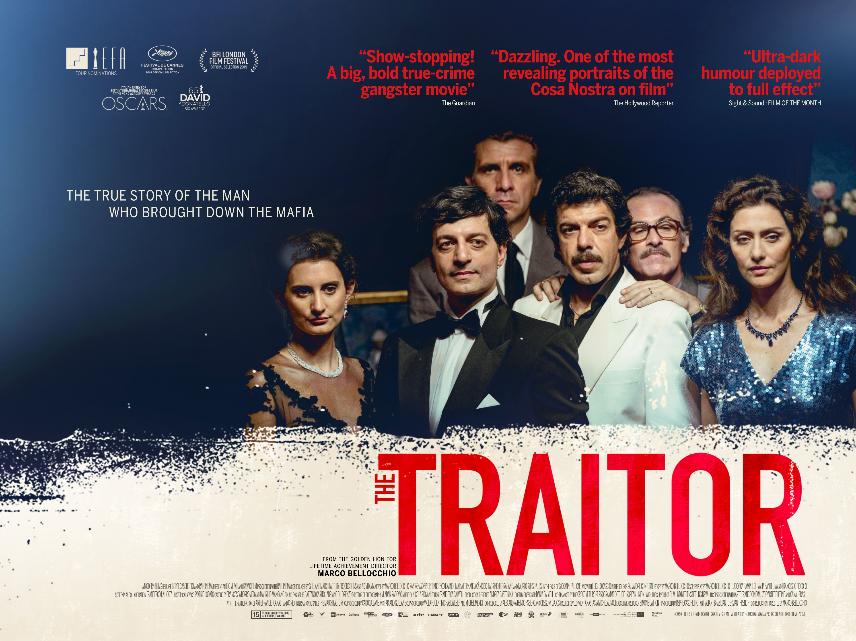 Comparisons are undoubtedly going to be made between The Traitor and The Godfather as both centre around the Mafia, both involve the Corleone family and both begin with a family gathering.

In The Godfather the gathering was for a family wedding whereas in The Traitor it’s a meeting of family’s over the heroin trade.

The Traitor is based on the true story of Tommaso Buscetta, Buscetta, who was the head of one of the Cosa Nostras most powerful families (Buscetta later explains that The Mafia was a name given to Cosa Nostra by the media), became disillusioned with them over their shift to the drug trade and in the 80’s fled to Brazil with his wife.

Whilst in self-exile Buscetta could only watch as, back in Italy, The Cosa Nostra settle old scores and murdered, amongst scores of people, his sons and brother.

Arrested by the Brazilian police and extradited to Italy, Buscetta would make the decision to betray the eternal vow that he made to the Cosa Nostra and testify against them. The decision would ultimately lead to the arrest and conviction of over 300 of their members.

The Traitor is a fascinating film let down by a confusing story that fails to dig deep enough into its subject matter to make it truly interesting. In one of the early scenes Director Marco Bellocchio chooses to add an image on screen showing numbers counting up, it’s not apparent as it’s never explained, but the changing numbers are meant to indicate the growing body count as The Cosa Nostra carry out their revenge killings. This is one of the problems with The Traitor, things are very rarely explained. Another example is Buscetta’s trip to Brazil, a TV news report, over 30 minutes into the films running time, is the first time we, the audience, get an explanation to his past life and why he’s being extradited to Italy.

The Traitor is not without its merits, Pierfrancesco Fayino as Buscetta carry’s a menacing threat with him at all times and is particularly good as is Maria Fernanda Cândido as his supportive wife. The scenes, as various Cosa Nostra bosses throw accusations at each other in a court that appear to be out of control, are some of the films finest.

The Traitor is an enjoyable if flawed piece of filmmaking. Running at over two and a half hours very little, if any, time is actually taken to explain any of the crimes that the Cosa Nostra members were responsible for (including Buscetta). In the end it just becomes a lot of faceless people confusingly shouting at one another in a court of law.

If only Director Marco Bellocchio, who also co-wrote, had used some of the long running time to explain more and flesh out his characters, The Traitor might have been a film that could be compared to The Godfather, as it is The Traitor is a film with only a passing resemblance to Francis Ford Coppolas’s classic.