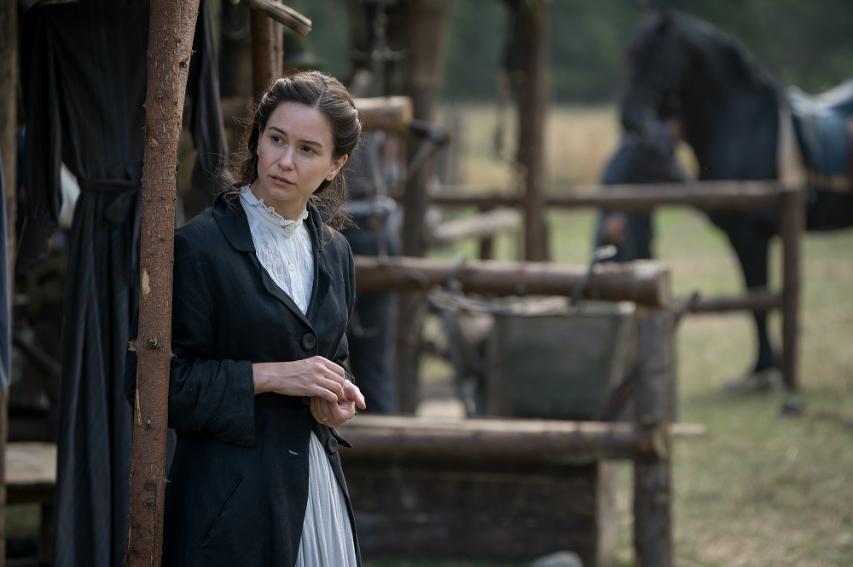 Set in the American Northeast in the mid-19th century The World To Come is a sombre and depressing look at the life of two of Americas early female pioneers. Abigail (Katherine Watson) lives on a farm with her husband Dyer (Casey Affleck), a silent and dour character who has more time and affection for his hogs that he does for his wife. Their coldness towards each other isn’t helped by the sudden death of their young daughter.

In an effort to explore her emotions Abigail takes to writing a diary, most of the narrative of the movie comes from a voiceover from Abigail as she quotes extracts from said diary. The use of captions, showing the passing months, is used to the extreme, flashing up on screen every couple of minutes they only help to further slowdown the already leisurely pace of the story.

In between the constant fight for survival, either from fevers, blizzards or extreme heat, Abigail’s mood is lifted somewhat when she meets her near neighbour Tallie (Vanessa Kirby). Treated as no more than slaves by their husbands the pair start to grow closer until eventually they become more than just friends.

The World To Come sits in two camps, it’s both an old fashioned western and a modern tale that tries to show how oppressed woman were back in the days and how they really longed for more from their downtrodden existence. Unfortunately, despite two excellent performances from Watson and Kirby, the moroseness of it all, from the constant dark lighting to the oppressive music that seems to accompany every scene, makes The World To Come a really hard watch and a difficult movie to recommend.