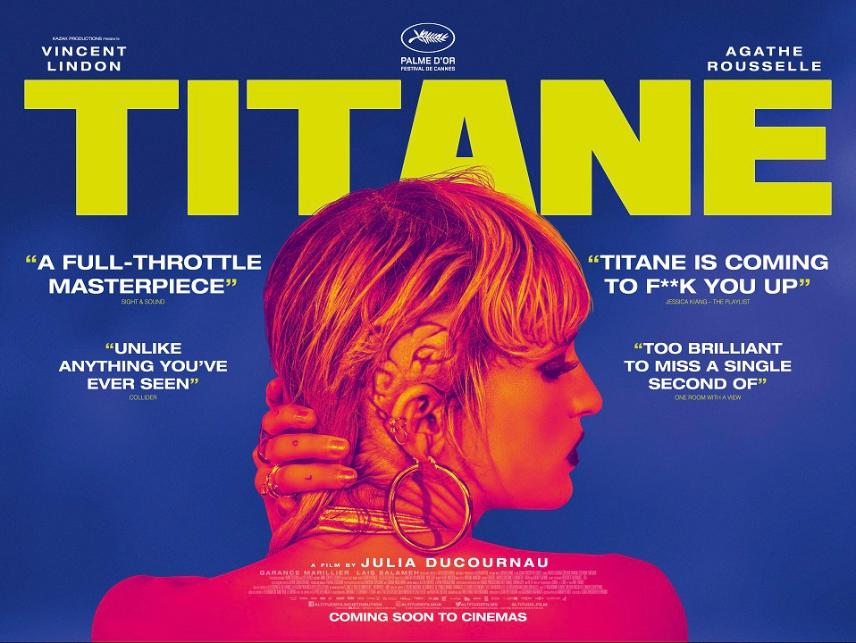 Titane could be a companion piece to Jumbo (202) as both are French-Belgium co-productions and both involve the female protagonist having sexual relationships with machines. In Jumbo it was a fairground ride whilst in Titane it’s a car and a fire truck.

The story begins with a young girl called Alexia being involved in a car crash where she suffers horrific head injuries that result in her having a titanium plate fitted on to the side of her skull. Years later an older Alexia (an excellent Agatha Rouselle) is now working as a showgirl at a motor show. After being approached outside by one of the motor shows customers, who she brutally murders, she returns to the showroom where she, finding a car has turned itself on, has sex with the car. Honestly you couldn’t make it up.

Titane then turns into a serial killer film as Alexia randomly murders various people, including her mother and father who she locks in their bedroom and burns alive.

And just as Titane starts to look interesting as a serial killer film it takes a bizarre U turn and becomes a story about a lost boy and his reunion with his with his father. Confused, let me explain.

Seeing a wanted poster with her face on it Alexia cuts off her hair tapes down her breast and, oh I forgot to mention, she’s pregnant the father being the car she had sex with in the showroom, and her large pregnant belly. She then goes to the police and claims to be a lost boy she’s seen on a poster, called Adrien.

Vincent (Vincent Lindon) the lost boy’s father turns up and, after refusing to take a dna test, accepts Alexia as his long lost son. He then takes him to his fire station where, before a bizarre conclusion, as Alexia or Adrien having sex with a fire truck.

Bearing similarities to the work of David Cronenberg, Julia Ducournau’s film, she directed as well as wrote the script, is going to split opinions, there are those that will love it for its weirdness whilst others will dislike it for the very same reason.

If you liked either Jumbo or the weirdest work of Cronenberg then Titane is going to be right up your street. Titane is certainly unique but it won’t be for everyone.