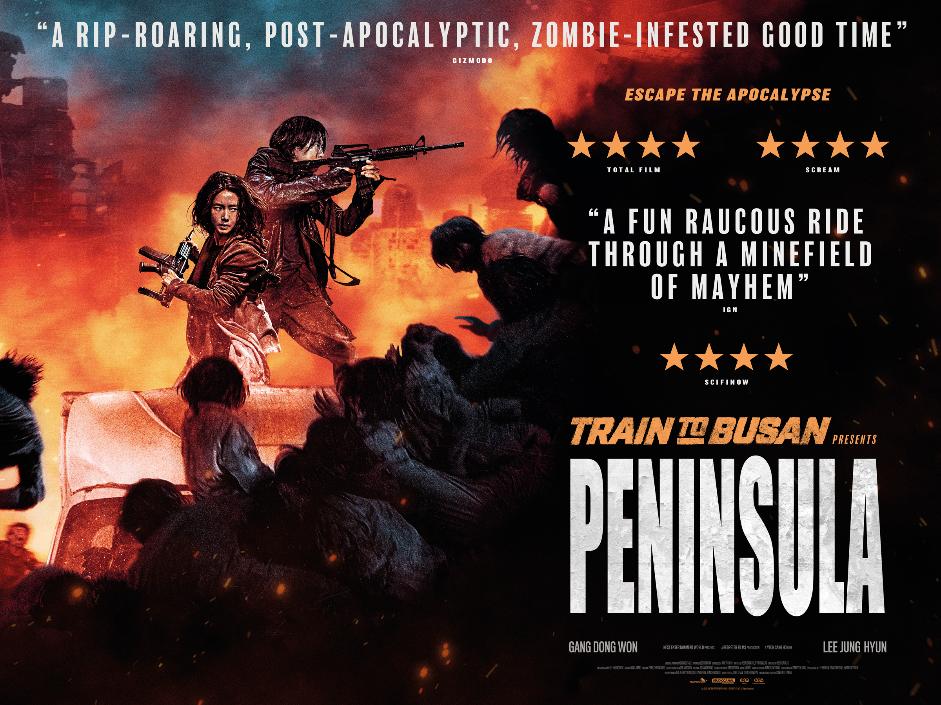 Following on from TRAIN TO BUSAN, one of the most successful Korean films ever made, writer/ director Yeon Sang-ho presents the final instalment of his zombie trilogy with TRAIN TO BUSAN PRESENTS: PENINSULA — an all action, all thrills sequel, boasting an all-star ensemble cast of some of Asia’s finest acting talent includingGang Dong-won (1987: WHEN THE DAY COMES),Lee Jung-hyun (BATTLESHIP ISLAND),Kwon Hae-hyo (DEFAULT),Kim Min-jae (PSYCHOKINESIS),Koo Gyo-hwan (JANE),Kim Do-yoon (THE WAILING),Lee Re (SEVEN YEARS OF NIGHT) and Lee Ye-won (ROMANG).

Already having achieved great success in its home country earlier this year, PENINSULA depicts a post-apocalyptic vision of Korea four years on from the events of TRAIN TO BUSAN, in which the entire country is overrun with zombie hordes. With ramped up visuals and knockout special effects from over 250 VFX artists, including an epic high-octane car chase across the Korean peninsula, PENINSULA is a sensory feast for action, horror & Asian cinema fans alike and not to be missed! PENINSULA was also the first Korean film in the same universe to be invited back-to back as part of the Official Cannes 2020 selection.

Peninsula will also be available on DVD, Blu-Ray & EST from 30 November, for which pre-orders are now live here and will also include the limited edition HMV Exclusive First Edition and Train to Busan Trilogy Blu-ray Boxset. All formats will come with the Peninsula: Making Of featurettes – The Action; The Characters; The Director; and The Sequel.

Four years after South Korea’s total decimation in TRAIN TO BUSAN, the zombie outbreak thriller that captivated audiences worldwide, acclaimed director Yeon Sang-ho brings us PENINSULA, the next nail-biting chapter in his post-apocalyptic world. Jung-seok (Gang Dong-won), a soldier who previously escaped the diseased wasteland, relives the horror when assigned to a covert operation on the quarantined peninsula with two simple objectives: retrieve and survive. When his team unexpectedly stumbles upon survivors, their lives will depend on whether the best—or worst—of human nature prevails in the direst of circumstances.