Altitude is delighted to announce the Home Entertainment release of

• “This Side of Rage” Featurette 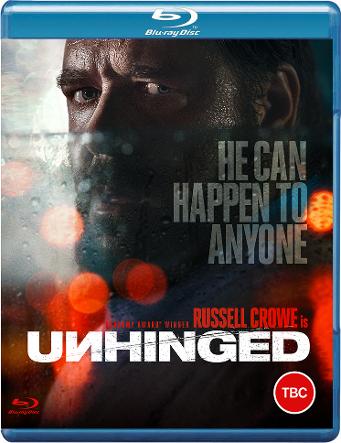 With cinemas starting to open back up after being closed due to the Covid pandemic one of the most anticipated films in the first wave of releases has to be Russell Crowe in the thriller “Unhinged”.

Unhinged begins with a man (Crowe) – he’s called the man in the press releases so we’ll stick to that name - quite obviously having a bad day, you know he’s having a bad day as we first see him downing some prescription tablets then throwing his wedding ring into the back seat of his car. He then exits his car and goes into a house where he bludgeons a man and a women to death with a metal bar. Then, just to add some icing to the cake, he torches the house with both occupants inside.

Meanwhile, after the carnage of the night before, the following morning sees single parent and self-employed beautician Rachel, (Caren Pistorius) trying to get her son Kyle (Gabriel Bateman) to school so that she can get to her first appointment on time

Stuck in traffic on the freeway Rachel, after losing one of her biggest customers due to her timekeeping, makes the fateful decision to head off the freeway.

Unbeknown to Rachel, the morning news is breaking a story about the murder of two individuals whose house was also torched. The prime suspect is the female occupant’s ex-husband who, we’re informed, was sacked from his job the day before and as a result has lost his pension. The media warn the watching public that “the suspect is still at large and he’s not to be approached”.

Still stuck in traffic a flustered Rachel sounds her horn at a male driver who cuts her up, unfortunately for her the driver happens to be the man and now he is even more pissed off with life than he was the previous evening.

Asked by the man to apologise and after giving a half-hearted apology she’s warned that her day is just about to get a lot worse, and boy is he right.

What follows is a brutal game of cat and mouse as the man stalks and pursues Rachel through a maze of city streets leaving carnage and death in his wake.

Nothing about Unhinged is particularly subtle as for the 90 odd minutes of its running time it moves from one violent scene to another.

Crowe, who’s not averse to playing a bad guy (Romper Stomper and 310 To Yuma to name but two), is on the top of his game as he snarls and bludgeons his way through everything and anyone he meets, “vengeance and retribution” is what I’m after he tells one of his victims.

Unhinged is without doubt a mirror on modern society, the opening credits are testimony to that as we see various footage of road rage incidents that aren’t a million miles away from some of the scenes in Unhinged.

If, in perhaps your first trip to the cinema in months, you’re after some escapist nonstop action Unhinged is certainly worth seeking out, just remember, don’t sound your horn at anyone after you leave the cinema as you never know who the other driver might be, it just might be the man.