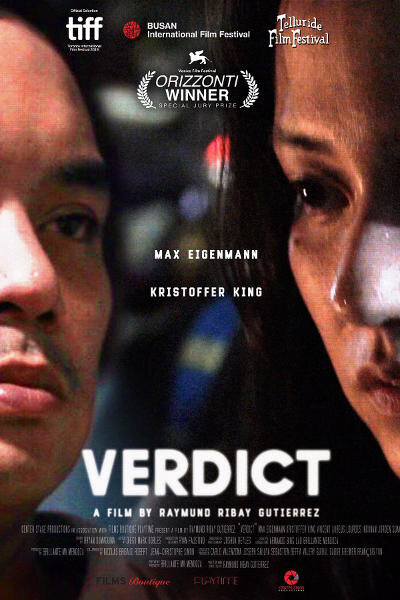 Joy and her six-year-old daughter Angel live in Manila, with her husband, Dante, a small-time criminal. As so often in the past, Dante comes home drunk at night and brutally beats Joy. This time, he also hurts Angel. Joy grabs her daughter and flees to the local police station, to finally get him sent to jail. But Joy is to discover that the search for justice comes at a price. Her case, obstructed by corruption, bureaucracy and seemingly indifferent officials. Lacking witnesses to support her case, and her husband released back onto the street, Joy starts to feel that she and her daughter are increasingly under threat.

Verdict was the official Philippine entry to the International Film Category for the Oscars in 2020 and the deserved winner of the prestigious Horizons Special Jury Prize at the Venice Film Festival. It is in good company - previous winners include 2015’s Free In Deed, and Court (2014), about the Indian legal system. Verdict is equally compelling, an affecting examination of the dubious notion of ‘justice for all’.

Filmed in a semi-documentary style, Verdict stars Max Eigenman, who won an Asia Pacific award for her bruised, and bruising, role, and Kristoffer King, who sadly died last year. The timely film casts an unflinching gaze at a difficult subject, too often ignored - the dark heart of male violence and its appalling consequences; and how the law courts seems to favour only the fortunate and connected - with barely a concern for the victims.