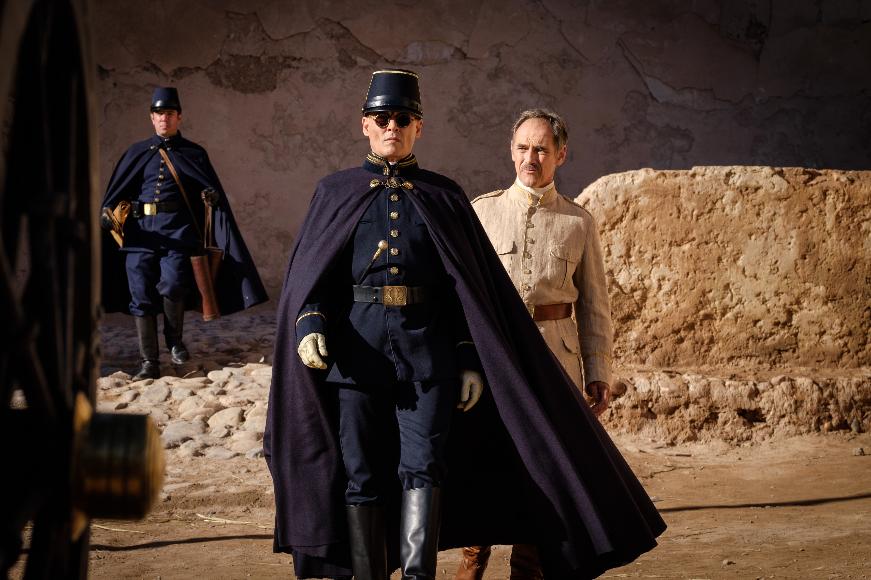 Set in some faraway land of deserts and frontier settlements that’s ruled over by a faceless and nameless Empire, everything is kept deliberately vague, “Waiting for the Barbarians” tells the story of a far outpost governed by a person simply known as The Magistrate (Mark Rylance). Coming close to retirement his oasis in the desert is a peaceful place where the villagers live in coexistence with the natives beyond the wall and crime is virtually nonexistence, the town doesn’t even have a jail he proudly tells others.

Happy and content with his surroundings, “they want me to take my holidays but I’m not really bothered” he tells one local, the peace is suddenly broken when Colonel Joll, played by Johnny Depp in a bizarre choice of character that seems to be based on a cross between Jack Sparrow and Robert De Niro’s character in “The Adventures Of Rocky and Bullwinkle”, arrives with a number of men. The purpose of his visit it would seem is to interrogate the “barbarians” as there’s intelligence that their planning a revolt.

Despite The Magistrates pleas that there’s no revolt in the offing Joll sets about his task with some gusto and brutally beats his prisoners to within an inch of their lives, or in some occasions beyond that point. In one brutal scene half a dozen men are joined together by a wire that’s inserted through the palms of their hands and then through each cheek. And, as if Depp’s sadistic Colonel wasn’t enough, just to add some fuel to the fire he has an evil underling (Robert Pattinson) who turns up towards the end in order to bash some more local heads in.

Meanwhile as all this brutality is going on the poor Magistrate is trying to protect his people, a task which inevitably leads him into conflict with Joll.

“Waiting for the Barbarians” is a film about how easily peace can break down and how l bad decisions, no matter how small, can have lasting and deadly consequences.

Rylance is the glue that holds the story together and is particularly good as is Gana Bayarsaikhan who plays one of Joll’s victims. Unfortunately it’s hard to know what to make of Pattinson and Depp’s performances as both verge on being on the cartoonish side, Depp’s capable of being a much better and more serious actor than he shows here, just look at his performance in “Donnie Brasco” for proof of that.

“Waiting for the Barbarians” is not without its flaws, on the plus side it has a cracking story and some beautiful cinematography. Ultimately the main thing is that it’s entertaining and you can’t ask for much more than that. Recommended.