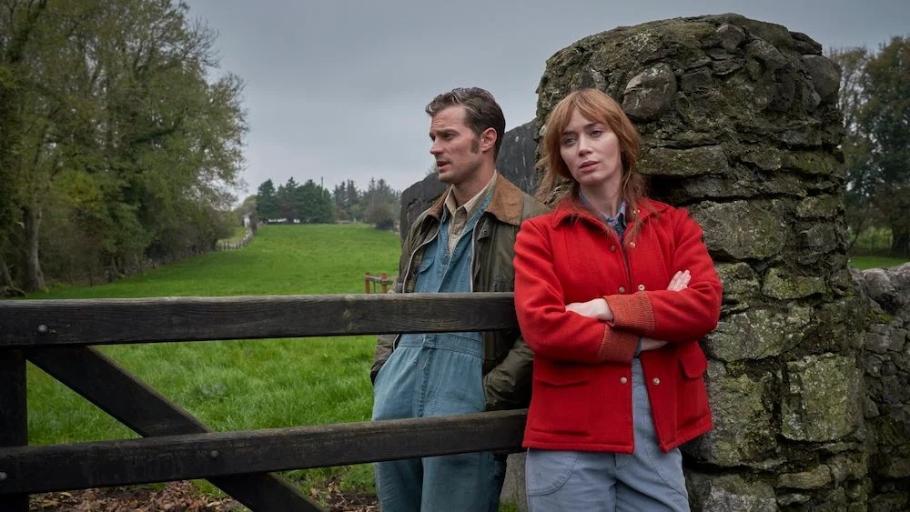 It would be easy to knock Wild Mountain Thyme, as many have, it’s accents are at best questionable and the ending, which has taken a life of its own on social media, is, to put it kindly, rather strange. But in its defence I don’t imagine that Oscar and Pulitzer winning writer director John Patrick Shanley (Doubt, Moonstruck) intended for Wild Mountain Thyme to be anything more than a good old fashioned piece of escapist entertainment and if that is the case then he’s most certainly succeeded.

Jamie Dornan, proving after Barb & Star Go To Vista Del Mar that he’s as comfortable in a comic role as he is playing straight up drama, is Anthony Reilly a day dreamer who has spent his entire life, along with his father Tony (Christopher Walken), working on the family farm.

Meanwhile in the next door farm, along with her mother, stays Rosemary Muldoon (Emily Blunt), a headstrong independent woman who has been in love with Anthony since she was 10 years old.

Blind to Rosemary’s affection Anthony is crushed when his father tells him that he’s a better day dreamer than a farmer and when he heads for pint of Guinness in the great pub in the sky he’s going to leave the farm to Anthony’s American cousin, Adam (Jon Hamm).

It’ll come as no surprise to anyone that when Adam turns up to make a claim on his inheritance his head is turned by the beautiful Rosemary. Spurred on by the competition poor Anthony is left to fumble about as he tries to find a way to win the heart of his true love before she’s swept of her feet by the dashing American.

Shanley paints a picture of Ireland that invokes the memory of John Ford’s classic The Quiet Man, green fields and rain showers are plentiful, Blunt even has the obligatory Irish red hair and looks not too dissimilar to Maureen O’Hara in the aforementioned The Quiet Man.

Wild Mountain Thyme with its mix of Irish charm, and some, minus the accents, wonderful performances is guaranteed to melt the hardest of hearts.

If it’s a piece of rock solid entertainment you’re after then there’s worse things that you could do than spent a couple of hours in the company of the Muldoon’s and the Reilly’s.