The 18th edition of the annual festival will open with the UK premiere of The Outfit, a gripping and masterful thriller starring Academy Award winner Mark Rylance, and close with the UK premiere of the Camera D’or-winning Murina, a tense family drama directed by Antoneta Alamat Kusijanovic and executive-produced by Martin Scorsese.

Tickets go on sale from 10am Monday 31 January

Glasgow Film Festival (GFF) has announced the full programme for its 2022 festival, which will run from 2 - 13 March at GFT and Cineworld Renfrew Street, as well as at partner cinemas across the UK and online. The 18th edition of the annual celebration of film will host 10 World premieres, 4 European premieres, 65 UK premieres and 13 Scottish premieres , encouraging audiences to return to the cinema and the film festival experience. GFF will also host a very exclusive preview screening of the first episode of Season 6 of STARZPLAY’s worldwide smash-hit Outlander and welcome Glasgow-born creative force Armando Iannucci with a very special live ‘In Conversation’ event, looking back over his wide-ranging, multi-media career distinguished by his brilliant feel for character, unforgettable dialogue and razor-sharp wit.

For the first time ever, GFF will partner with cinemas across the UK to simultaneously screen some of its biggest premieres. The opening gala UK premiere of The Outfit, the closing gala UK premiere of Murina, plus a special International Women’s Day gala UK premiere of Happening on 8 March, will show on big screens throughout the country, from Stornoway to Bristol via Edinburgh, Manchester, Dundee, Sheffield and London. A selection of festival highlights, including Scottish director Ruth Paxton’s feature debut A Banquet and will screen both in GFT and online via the Glasgow Film At Home platform. 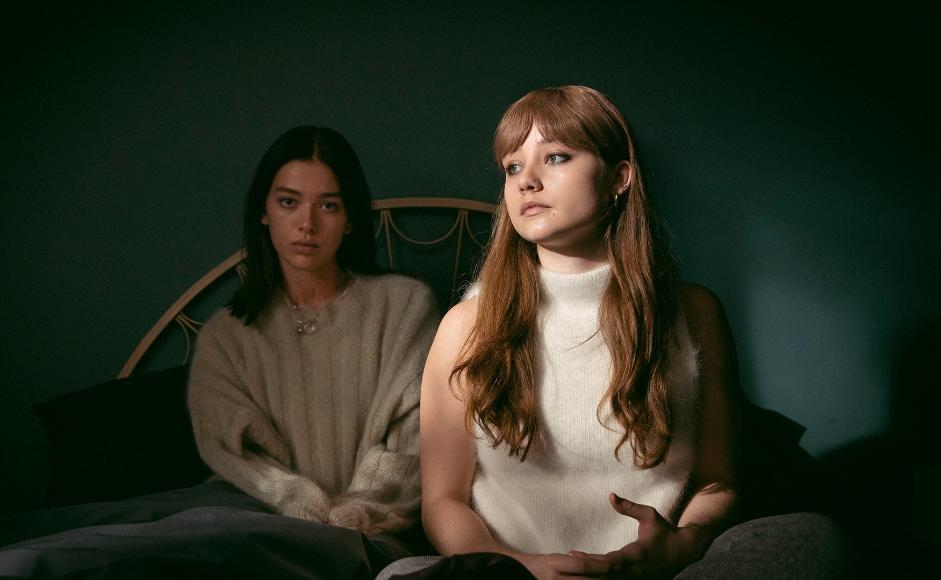 Scottish director Ruth Paxton's  debut feature A Banquet screens in both THE GFT and online via the Glasgow Film At Home Platform. 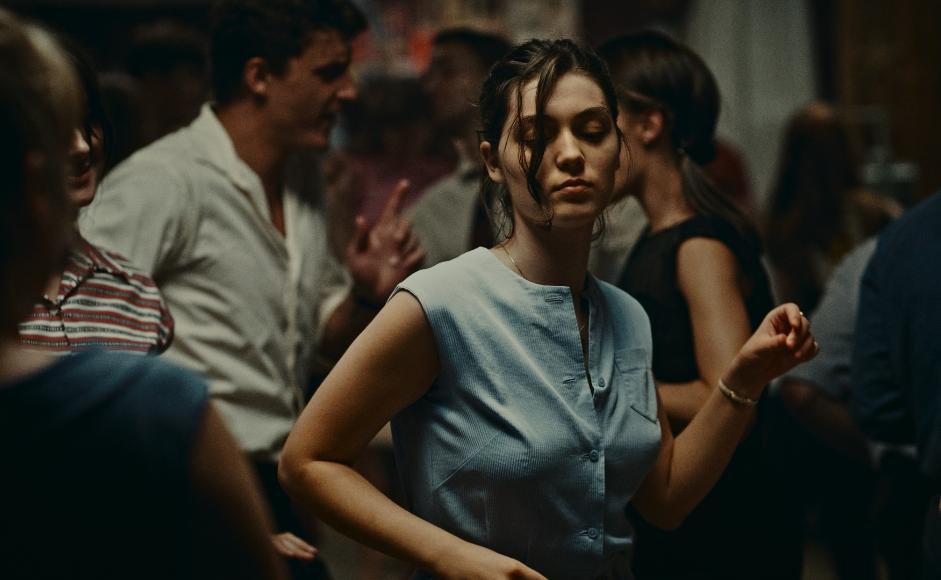 GFF is your first chance to catch a host of highly anticipated new releases on the big screen. Direct from Sundance, GFF will host the European premiere of Jono McLeod’sMy Old School. Starring Alan Cumming, the docudrama uncovers the real-life story of Bearsden Academy school pupil, 17-year-old Brandon Lee, who in 1995 was unmasked as 30-something former pupil, Brian MacKinnon, who returned to his old school under a new identity to retake his exams after failing medical school. MacLeod, who went to school with MacKinnon in the 1990s, uses interviews and archive footage to retrace the steps of the boy he knew as Brandon. Other European premieres include McCurry: The Pursuit of Colour, an exploration of the unforgettable, haunting images captured by renowned photojournalist Stephen McCurry; Stefan Forbes’ Hold Your Fire, a riveting true crime story of a botched robbery, a murdered policeman, a media scrum and a hostage situation in 1970s Brooklyn and Shin Su-won’s love letter to South Korean female film directors Hommage.

GFF will see the first ever big screen outing of Skint, a series of powerful, heartfelt monologues commissioned for the BBC and now showing as a feature-length compendium. Skint brings together a wealth of talent on both sides of the camera, with a creative team including Peter Mullan, Jenni Fagan,Cora Bissett and Derry Girls creator Lisa McGee, to tell vivid, heartrending personal stories of living with poverty, homelessness and how it is used to define who you are. Other GFF World premieres include the freewheeling documentary Wake Up Punk from Joe Corré - the son of Malcolm McLaren and Vivienne Westwood who in 2016 burnt millions of pounds worth of punk era memorabilia in protest – who questions whether the counterculture legacy has been commodified and distorted and Doug Aubrey’s hybrid feature, Legacy of an Invisible Bullet, which uses direct storytelling, technology and observational filmmaking to delve into the collapsed time universe of a cancer patient and war correspondent as he faces his demons, his archive and tries to survive.

GFF also welcomes back the double act of writer-actor-producer Jonas Chernick and writer-director-producer Jeremy LaLonde, whose James Vs. His Future Self was one of the sleeper hits of GFF20, with the World premiere of Ashgrove, a mesmerising new feature following a scientist played by Amanda Brugel (The Handmaid’s Tale) as she desperately searches for a cure for the pandemic that is threatening both the world’s water supply and the survival of the human race.

Some of the most talked-about films on the festival circuit will also be getting their first Scottish big screen outing at GFF22, including Benedetta, Paul Verhoeven’s outrageous saga of a 17th century nun’s forbidden affair with another woman, and Joachim Trier’s freewheeling anti-romcom, The Worst Person In The World, starring a dazzling Renate Reinsve as woman trying to figure out her place in an unpredictable world.

Alongside My Old School, by Scottish director Jono McLeod, GFF22 is thrilled to showcase a range of Scottish talent both behind and in front of the camera. GFF favouriteRobbie Fraser (Final Ascent, Pictures From Afghanistan) reunites with legendary Scottish war photographer David Pratt in the World premiere of Pictures From Iraq, a fascinating, highly personal journey into the recent history of a war-torn land.

Young Glasgow-based filmmaker Paul Morris presents the World premiere of his micro-budget Hamilton-filmed debut feature, Angry Young Men, a riotous comedy following local young gang, ‘The Bramble Boys’, defending their home turf against rivals. There’s the first big screen outing for Lizzie MacKenzie’s documentary, The Hermit of Treig, a warm and heartfelt portrait of her friend, Ken Smith, who has spent the last four decades living off-grid in a log cabin near Loch Treig, ‘the lonely loch’. Scottish director Ruth Paxton makes her long-anticipated feature debut with A Banquet, combining family psychodrama with an apocalyptic nightmare as a new widow tries to raise her teenage daughters alone. Martyn Robertson’s thrillingly shot documentary Ride the Wave chronicles the 14-year-old Scottish surfing champion, Ben Larg, as he prepares to surf the one of the biggest and coldest waves on Earth, around County Sligo. Filmed in Scotland and starring a Scottish cast, Nobody Has to Know, directed by Bouli Lanners, is a touching romance that follows a stroke patient (Lanners) as he exiles himself to a remote Scottish island with amnesia. Can his ex, played by Michelle Fairley (Game of Thrones), help him piece together his memory and the secret relationship they had together?

Synopsis: From the Academy Award-winning writer of The Imitation Game (Graham Moore) comes The Outfit, a gripping and masterful thriller in which an expert tailor (Academy Award winner Mark Rylance) must outwit a dangerous group of mobsters in order to survive a fateful night.

The Outfit opens Glasgow Film Festival 2022 on the  2nd March

Continuing with the theme of women filmmakers, the prestigious Audience Award – the only award given out at GFF and voted for by our most important guests, the festival audience – returns with seven outstanding films, six of which are directed by women. The shortlist includes Charline Bourgeois-Taquet’s debut feature, the witty romantic tale, Anaïs In Love.Cecile Ducrocq’s first film,Her Way, stars Laure Calamy ( Call My Agent) as a sex worker doing all she can to create a better life for her son. Bertha Basholli’s Hive was an award-winner at Sundance and follows the inhabitants of a village that was the site of the Krusha Massacres during the Kosovo War, and their attempts to move on without their loved ones. Set in Mexico and inspired by a true story,Teodora Mihai’s gripping thriller, La Civil, explores what a parent can do to save their child after they’ve been kidnapped. Elie Grappe’s Olga, follows up-and-coming teenage gymnast, Olga (Anastasia Budiashkina) as she leaves to train for the Olympics in Switzerland shortly before her home country begins to experience political upheaval. Exploring themes of exile and the strain put on young athletes, the film brings the personal and the political together in this tense, yet subtle drama. Mob mentality meets the supernatural in Arsalan Amiri’s eerie, yet funny, Zalava, which sees townsfolk suspect a demon is nearby and find themselves caught between a local shamen, who claims to be able to exorcise the demon, and the local sergeant, who prefers a different approach. Lizzie MacKenzie’s The Hermit of Treig is also nominated for the Audience Award, which is sponsored by Caledonian MacBrayne.